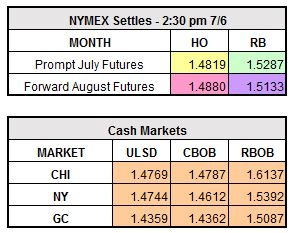 Last week I talked about how the oil rally we saw could have been a dead cat bounce. That cat is falling today as it appears production increases undermine stock draws. Despite the larger than expected crude oil inventory drawdown yesterday of 6.3 million barrels, the market is shrugging it off today with the bears dragging August WTI down $1.62 to $43.9/barrel.

After the DOE statistics reported yesterday, the market focused on the crude oil draw and initially rallied. However, traders finally paid attention later in the afternoon to the 88,000 barrel per day increase in U.S. oil production last week and the 1.1% increase in refinery rates. These numbers, coupled with the extraordinary OPEC production last month of 25.92 million barrels per day, paints the picture that low $40s oil needs to persist in order for producers to feel the pain and start combating this glut of product.

Today’s job report revealed that U.S. non-farm payrolls increased by 222,000 last month vs. the 179,000 expectation. This is a good headline for the economy, but inflation is trending below the Fed’s 2% target. Therefore, Reuters reports that analysts believe we’ll see a third interest rate hike this year, most likely in December. Furthermore, while the unemployment number is currently 4.4%, the “real” unemployment number which includes all of those who’ve stopped looking for work, jumped 0.2% to 8.6%.

Tropical Depression Four is currently heading west-northwest through the tropics towards the Leeward Islands. Accuweather predicts that it is unlikely to develop into a tropical storm over the next few days, but it is something to watch in case it heads towards warmer waters where it could strengthen.