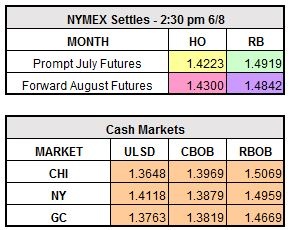 The oil complex is trading moderately higher today, but is facing potential dollar index headwinds as a result of the U.K. election yesterday and the FOMC, Federal Open Market Committee, meeting next week.

Theresa May and the Conservative party woke up to embarrassment today after election results proved they lost the majority of the 650 seats in the U.K. Parliamentary government. May called a snap election on April 18th in order to seek more Conservative seats to strengthen their resolve for a Brexit. As a result of a Parliament that may now be in gridlock mode, the British pound fell to its lowest level in 7 weeks. This caused the dollar index to rise .527 to 97.425, nearing three week highs.

This strength in the dollar index comes before the FOMC meeting next Tuesday and Wednesday. About 97% of polled analysts believe the FOMC will increase interest rates by 0.25%. Traditionally, a hike in interest rates increases the value of the dollar. Remember, crude oil in dollar terms becomes more expensive as the dollar index rises. Therefore, not only is crude oil facing renewed glut problems, it now potentially faces a strengthening dollar which could exert downward pressure on prices even further.

Speaking of the crude oil glut, the Brent crude futures market now shows a clear contango pattern as more traders are putting crude into floating storage to combat the growing glut. This is adding to the bearish outlook on prices and is making traders weary about breaking below $45, which could cause aggressive stop-loss selling.

Despite all of the headlines this week, it is impressive that the oil market hasn’t been that volatile as of late. In years past, the Qatar story, U.K. election, and even Comey testimony would have made oil prices volatile. However, we haven’t seen that dynamic recently and it’ll be interesting if that continues to be the case.