Coronado Coal, a multinational coal producer, has its sights set on the development of a $251 million, 340-acre coal mine in Forward Township, Allegheny County.  The mine would be operated by Coronado’s subsidiary, Mon Valley Minerals.  This property was once owned by Consol Energy and sits on the 25-million-ton Upper Freeport Coal seam. 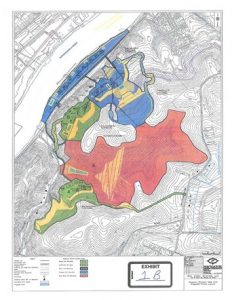 Coronado has owned the 980 acres of land since 2016 and debuted their plans before the pandemic.  It was only within the past few weeks that they were able to have a hearing with the Forward Township Planning Commission and the community.  The property is only zoned as one third industrial, and the balance is zoned as conservation and residential.  The Commission cannot make the decision on their own and voted to not recommend the current proposal to the township’s Board of Supervisors.

The notion of a new coal mine seems counterintuitive to the global push to move to cleaner energy sources; however, this mine would specifically produce metallurgical coal used in the steel making process.  None of the coal produced in this mine would be used for energy creation.

Within the southwestern Pennsylvania area, there are two steel producers who use this coal to produce coke.  Coke, when combined with iron ore and other raw materials, is used to produce steel for construction, transportation, and appliances.  Most of the world’s steel production comes from facilities who use coke in this process.

With the anticipated infrastructure deal approaching finalization, the need for steel products will continue to increase.  That increase combined with a global lack of metallurgical coal causes strain on global supply as well as pushing up prices.  Coronado anticipates that that mine could take over five years to become operational.  The permitting process is extensive, and their best estimate is to be operational by 2027.

Many major coal producers are increasing their investments in metallurgical coal mines.  Consol Energy has invested in mining in Itmann, WV.  Corsa Coal has opened two mines in Somerset County, Pennsylvania while Arch Resources expects to open a mine south of Morgantown, WV.  “One of the major drivers in the market is the ongoing trade battle between China, a major market for metallurgical coal due to its heavy industrialization, and Australia, which has a locational advantage in supplying coking coal.”[1]  Geographically, Coronado believes that they are in a strong position for shipping with access to both rail and river options.

Coronado is currently proposing to create a “coal mining overlay district” on top of their current acreage.  The next step in the process is what is anticipated to be a fierce debate.