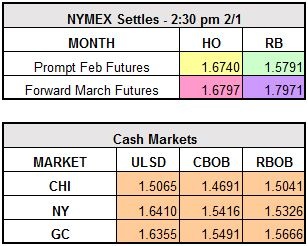 Punxsutawney Phil kicked off the day by seeing his shadow and letting us know we will have six more weeks of winter. Whether this pleases you or upsets you, take it with a grain of salt. According to the Pittsburgh Post-Gazette, “NOAA’s National Centers for Environmental Information notes that Phil’s forecasts have shown ’no predictive skill’ in recent years. AccuWeather finds the rodent has an 80 percent accuracy rate. But the StormFax Almanac reports that Phil has been right a lowly 39 percent of the time.”  Given our relatively mild winter already, many in the industry are hoping for colder temperatures to start pushing the heating oil out of the tanks and into consumers’ homes and businesses.

On the heavier side of news it was reported that Iran conducted a ballistic missile test yesterday, raising the already high tension level of the Middle East. The White House has put Iran “on notice” but little else was said in regards to any actions being taken towards Iran.  This is something everyone will be keeping an eye on as Iran seems to be taking a bolder stance since having sanctions lifted for oil production and, from the looks of it, pushing the boundaries of the nuclear deal negotiated back in 2015.  Reuters reports the following from National Security Advisor Michael Flynn, “Flynn said that instead of being thankful to the United States for the nuclear deal, “Iran is now feeling emboldened.”

Lastly there is reluctance in the market as many factors are in limbo after the first month of 2017. There have been slightly conflicting figures from two separate reports on OPEC compliance.  PetroLogistics came out and said that OPEC came through on 900,000 out of 1.2 mbpd in cuts, which comes out to 75% compliance.  Reuters, on the other hand, gives us figures closer to 80% based on pumping 32.27 mbpd vs. the target of 31.75 mbpd.  Either way, in light of the last OPEC cut failure in 2008, many would be happy with 75-80% compliance (especially since OPEC has historically achieved 60% compliance on average).  The main factor that can somewhat overshadow this is still the U.S. ramping up production.  The EIA is predicting that we could see a bump in annual production of nearly 110,000 bpd.  That would take the United States to roughly 9 mpbd in 2017.  With gains like this, the 2017 outlook of balancing the market could be pushed well into 2018.