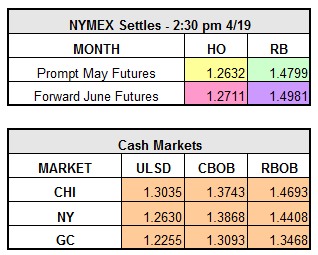 With most of the current news centered around last weekend’s OPEC meeting in Doha, described as a “flop” by one analyst, the resolved Kuwaiti oil workers’ strike and the continued market oversupply, I thought it would be interesting to compare where the settles are now versus where they were exactly one year ago.