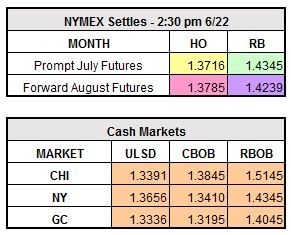 Saudi Energy Minister Khalid al Falih said OPEC is in no hurry to deepen its current production cuts from current levels since its May 25th meeting. This strategy has not worked out for OPEC. August WTI has fallen over 16% since OPEC decided to prolong production cuts. Some analysts are saying that OPEC may soon need to require Libya and Nigeria, both of whom are exempt from production cuts, to be a part of the cuts if they are to have any teeth and jump start crude prices.

Current U.S. oil production stands at 9.35 million barrels per day, close to eclipsing Saudi Arabia. Rystad Energy, an exploration and production consultancy firm, estimates that the newest drilled wells in the Bakken shale in the Midwest have a breakeven of approximately $38 per barrel. Because of improvements in drilling technology, we may be stuck in this lower price range for longer than people originally anticipated. The U.S. is still winning the battle against OPEC, but the sharp price decrease to combat the swelling glut isn’t beneficial to any driller in the oil patch.

OPIS reported that the Colonial Pipeline did not call allocation on Cycle 37, line 1. This line ships about 1 million barrels of gasoline per day from the Gulf Coast to the Northeast. It is extremely rare for the line not to be allocated; it has been consistently allocated since 2011. This is telling of the flooded refined product landscape we are currently experiencing. Shippers are now being forced to ship at discounted rates to keep their ratable commitments as refiners are still operating at over 94% of operable capacity in the U.S. Therefore, both the upstream and midstream oil businesses are feeling the pain with oil at these current levels.