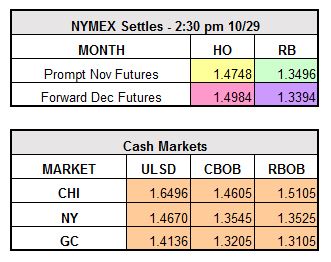 Despite the global oversupply of oil of approximately 1.5-2.5 mbpd, many traders are still buying.  They are doing so even though going long in recent years has resulted in losses over a billion dollars.   This buying has pushed the markets enough to provide technical buy signals.

In other news, a Reuters survey showed OPEC crude output is down 120,000 bpd in October at 31.64 mbpd from 31.76 mbpd in September. This decrease is due to declined production by top producers Saudi Arabia and Iraq which has outweighed greater supply from African members. However, with one day left in the month, the final figures may still be revised.

The ExxonMobil Joliet refinery in Channahon, IL is rumored to be having issues with its fluid catalyst cracker (FCC) and coker, which may further strengthen prices of refined products in PADD 2.  The Chicago market has been the strongest in the country over the past couple of months.