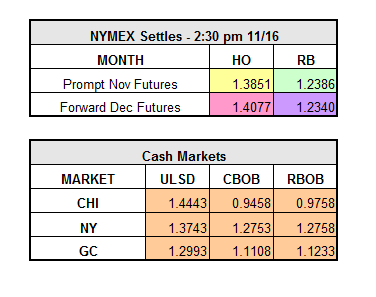 The geopolitical news has gotten louder with France declaring war on ISIS, after their airstrikes in Syria yesterday/Sunday. The market reaction from the aftermath of the attacks in Paris suggests that the global oversupply of crude stands strong, as it has been for quite some time now. How long will the global glut of product trump global market news? I thought this quote from a Commerzbank analyst in Germany was quite interesting; “The fact that France has stepped up its airstrikes against IS positions in Syria obviously increases the geopolitical risks, yet this is unlikely to disrupt oil production in neighboring countries.”

You can take an optimistic approach like the analyst above, or a pessimistic approach. Pessimism moving forward should be the route to take because using the phrase “unlikely to disrupt oil production in neighboring countries” is dangerous. With the spark of a continued war against terror, the word unlikely should never be used. Keep in mind that history has shown that Middle-Eastern unrest can provide price support.

WTI crude finished the day $1/bbl higher than Friday’s settle and $1.68/bbl above the day’s low. Brent gained 9 cents/bbl and closed $1.41/bbl above the low for the day. Diesel settled 38 points higher and gas was only down 3 points. The last hour of trading yesterday saw bullish sentiment in the market as diesel prices jumped back to even and slightly up to end the day. The commodity market has dropped off further early this morning but diesel has come back to even as of 11:30 A.M ET and gas is up a penny.