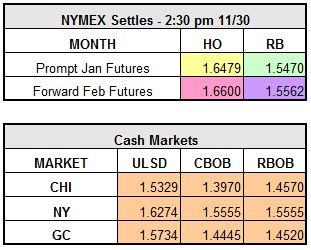 What an incredible, roller-coaster of a week we’ve been on due to OPEC’s historic decision to cut production on Wednesday. Many market participants were skeptical of a deal being done, as evidenced by the rally we’ve been on for the past three days.

WTI Crude prices traded as low as $44.85/bbl on Tuesday, when many doubted a deal could get done because Iran and Iraq expressed they did not want to cut production. However, once the deal was announced, a sharp buying spree was ignited and WTI traded as high as $51.72/bbl on Thursday, a 15% increase. This rally is entirely based upon this production cut, which in a best case scenario, won’t take place until January.

Non-OPEC producers are slated for a meeting on December 9th to potentially agree to a production cut target of about 600,000 bpd, which is a requirement to consummate the OPEC deal.  Russia is the largest producer of this group and shocked the world when it announced it would participate in a cut. For months Russia declared the opposite. Therefore, while we’re in rally mode now, the market may be in for another batch of volatility leading up to next Friday if Russia or another participant of the meeting hint at disagreement. That is why we urge caution to those of you who want to buy right now, because we may see a pullback.