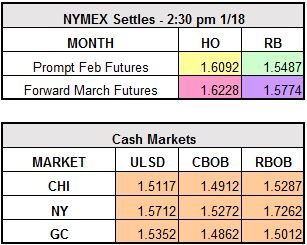 We saw a sell off yesterday due to multiple factors going on in the market. For starters, the dollar strengthened yesterday.  Typically, that will put downward pressure on oil prices.  Other factors, according to oil brokerage PVM include “growing conviction that global oil inventories will not start falling in the first half of this year and expectations of U.S. product inventories building.” When looking at U.S. production there are currently expectations that

The ball seems to be in the hands of the U.S. and Canada right now. As an example, consider the 275,000 acres Exxon purchased in West Texas a few days ago.  The land currently produces 18,800 barrels per day but is reported to hold roughly 60 million barrels of oil in that piece of land alone.  With production increasing in North America, and other non-OPEC countries, OPEC’s production cuts may have less price impact than the cartel desires.

PVM reports that “short-term equilibrium price range of $53-$58/bbl has been found.” With the OPEC agreement only lasting for six months, there is scepticism that we will see a large effect on the market after that short of a period of time.  The Saudi Prime Minister stated that the agreement was unlikely to be extended past the six month mark as he believes the compliance is already proving its worth.  OPEC is currently also trusting Russia (regardless of the lack of compliance in the past) to lower output by 245,000 bpd in the first six months of 2017.