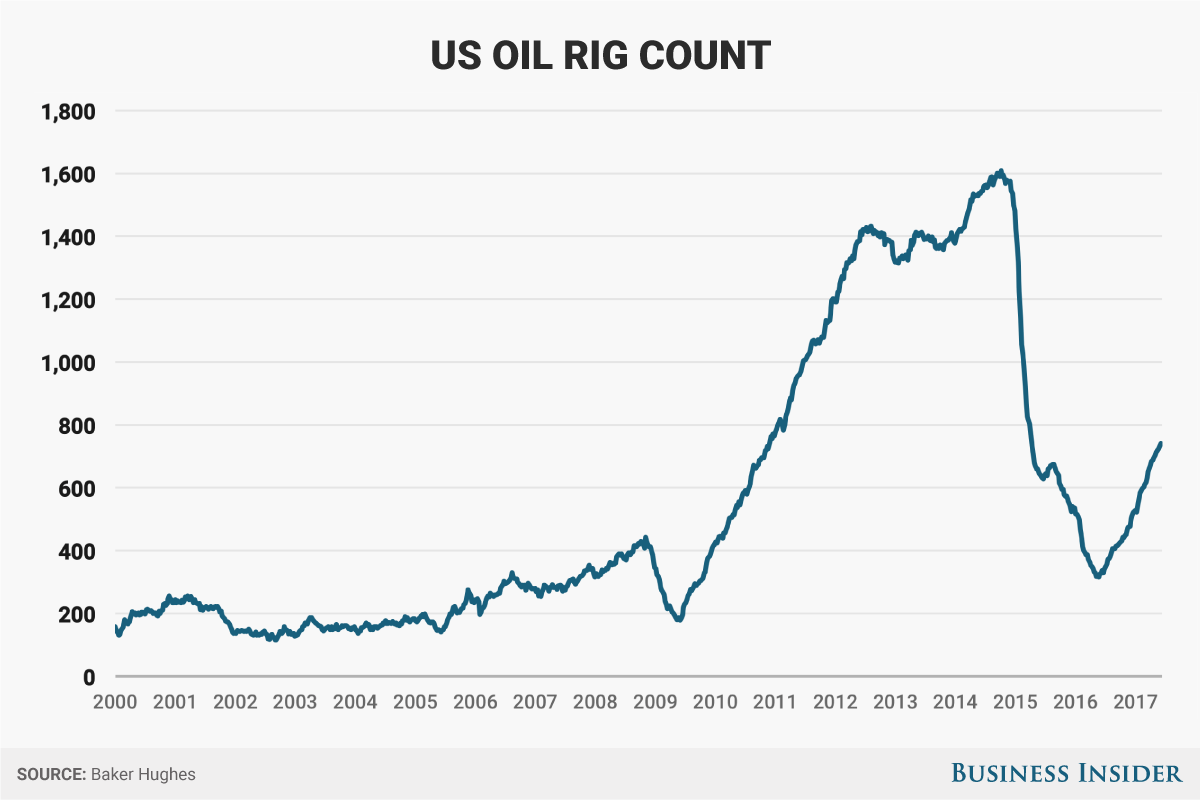 The U.S. has yet again kept the streak alive by having another positive influx of rigs come online. Last week, Baker Hughes reports, oil rigs have increased yet again by a count of 8 and natural gas rigs have increased by 3.  That brings crude rigs to a total of 741 and natural gas rigs to a total of 185 in the U.S.  These newest rigs bring the total rig count to 927 and also marks the longest streak of rig additions in nearly three decades.  To put this into perspective, this time last year we had 513 fewer rigs producing which would be an increase of 123.9% this year alone.

Taking a look at today’s futures trading activity, a report from Nasdaq states “Oil rose on Monday to break a three-day losing streak, after futures traders increased their bets on a renewed price upswing even though rising U.S. drilling helped keep physical markets bloated.”    The upward move is thought to be a technical bounce, stemming from oversold conditions seen over the past three days.    We are seeing this technical bounce today which lines up with the data in the CFTC (Commodity Futures Trading Commission) COT (Commitments of Traders) report.  The report showed traders have increased their net long positions and relieved the market of the oversold conditions we have seen as of recently.  The crude positions were increased by 8,714 contracts by the traders.

Lastly let’s just give a brief update on OPEC. A topic currently being discussed is how Qatar, though being viewed as the black sheep of OPEC currently, is still going to stick to their commitment of cuts they pledged just recently.  Regardless of the bans and port restrictions being sanctioned, Qatar will not waver and has been reported as saying that they will continue as OPEC has planned.  Beyond this though is another two OPEC members, excused from the most recent supply cuts, making even more noise.  Nigeria and Libya were given reprieve from the most recent cuts in an attempt to help them recover from “years of unrest that had hurt production” Reuters reports.  Nigeria’s production is said to have ramped up to a 15-month high and is looking like it could surpass roughly 1.75 million bpd.  Libya is looking like they will surpass 800,000 bpd, which would be the highest levels seen from the OPEC member since October 2014.  This production increase from the two members would reportedly add 600,000 bpd to the market and cut out nearly half of what OPEC has planned to cut.  OPEC has discussed putting caps on the two members but has recently decided to see how this plays out.  With the U.S. drilling like there is no tomorrow and these two OPEC members ramping up production OPEC’s cuts seem far to light to make a sustainable impact on the market.  Time will tell.