The oil market closed down across the board yesterday as all three major indexes reflected a bearish report from the Energy Information Administration, as well as increasing doubt over the impact of the OPEC/Russian production cuts.  While crude inventories fell 2.4 million barrels, gasoline and distillate stocks increased by 3.4 million barrels and 2.5 million barrels respectively, which were greater builds than what was expected.  Crude finished the session at $49.77, down $1.16 with RBOB closing down $0.0277 and diesel off $0.0195.

This morning, crude is hovering near the $50 per barrel mark as the market is moving cautiously ahead of two important meetings within the next week.  First up is this weekend’s OPEC / non-OPEC meeting set for Saturday in Vienna.  Last week, OPEC agreed to reduce production by 1.2 million barrels per day for the first half of 2017.  Nigeria however, which is exempt from the OPEC cuts, has indicated that it would like to boost its production by 200,000 bpd, which will eat into much of Russia’s planned cut of 300,000 bpd.  While the OPEC and non-OPEC producers continue to negotiate, many analysts are skeptical as to whether the current agreed-upon production cut will be sufficient enough to impact the current global oversupply and in turn rebalance markets.  “Optimism over the OPEC cut decision has eroded a bit.  The devil will be in the details,” said an Oslo-based trader.  The second meeting set for next week is the Federal Reserve meeting where it is widely expected that interest rates will be increased by 25 basis points.

As of this morning, the market is mixed with crude and diesel both up and RBOB down slightly. 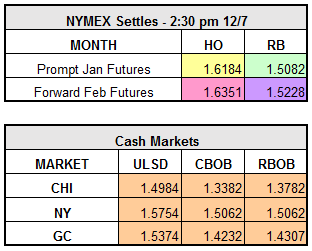