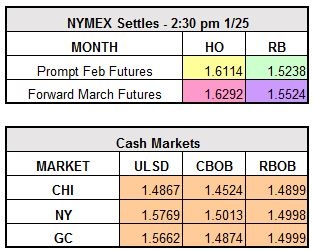 The oil complex is trading up today on the heels of the Dow Jones Industrial Average exceeding 20,000 yesterday-the first time this high water mark has ever been reached. WTI is currently trading up $1.18 to $53.93/bbl. Brent trades $1.29 higher to $56.37, as it continuously bounces off the $55 mark. This is happening despite a stronger dollar index today, last up $0.651 to $100.67. Many traders are weary of putting on short positions until we get firm OPEC January output numbers next week. The latest production number we have is from OPEC’s meeting this past Sunday when ministers said that they have cut 1.5 out of the 1.8 million barrels per day target already this month. Tune in next week…

Reuters reported earlier today that about 12 tankers holding more than 4 million barrels of crude oil are anchored off the Venezuelan coast unable to offload because their hulls are too dirty to navigate international waters according to maritime laws. Oil leaks at the Bajo Grande terminal in Venezuela have stained the tankers and PDVSA, the Venezuelan state-owned, oil and natural gas company, cannot pay for the repairs and/or cleanup, according to internal documents.

In other oil news, according to OPIS, gasoline demand is running about 7.7% behind year-to-date. Gasoline demand last week was 8.039 million barrels per day-this was the lowest weekly amount since February 2014.