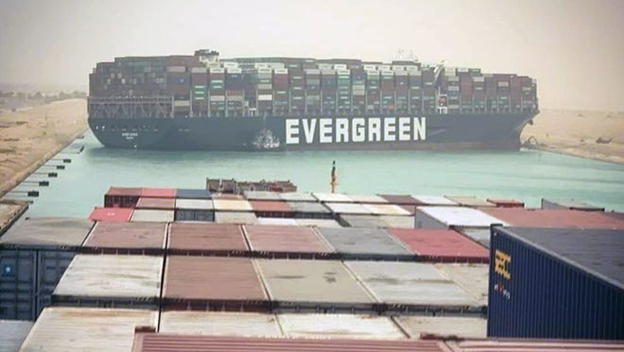 On Tuesday, March 23rd, the giant container ship, the Ever Given, ran aground in the Suez Canal causing hundreds of ships to get stuck at both ends of the canal. The canal connects the Red Sea to the Mediterranean Sea and carries approximately 10% of global shipping traffic. The Suez Canal is vital for nearly every cargo ship that moves between Asia and Europe, and it is also an important shipping lane for cargo coming from Asia to the East Coast of the United States. At the time of this writing, the Ever Given has been partially refloated and moved alongside the canal bank, but the backup is still impacting oil markets.

Following the initial news of the blockage, oil futures in New York rose as much as 3.4% following a significant drop in prices on Monday and Tuesday. Over the past two weeks oil prices dropped around 12% because of weakening physical demand and the unwinding of long positions. In conjunction with the news of the Ever Given running aground, positive economic data from Europe also helped boost prices. The economic data still sits at odds with concerns about another COVID-19 resurgence in Europe, but positive headlines and data have masked some of the virus concerns.

While headlines may temporarily cover up some of the resurgence concerns, ultimately physical demand will dictate where the market heads next. OPEC+ is meeting again next week, and pressure is mounting to help stop the slide. While the blockage of the canal put a temporary Band-Aid on the pull back, fundamentals will determine if the slide continues or stops.