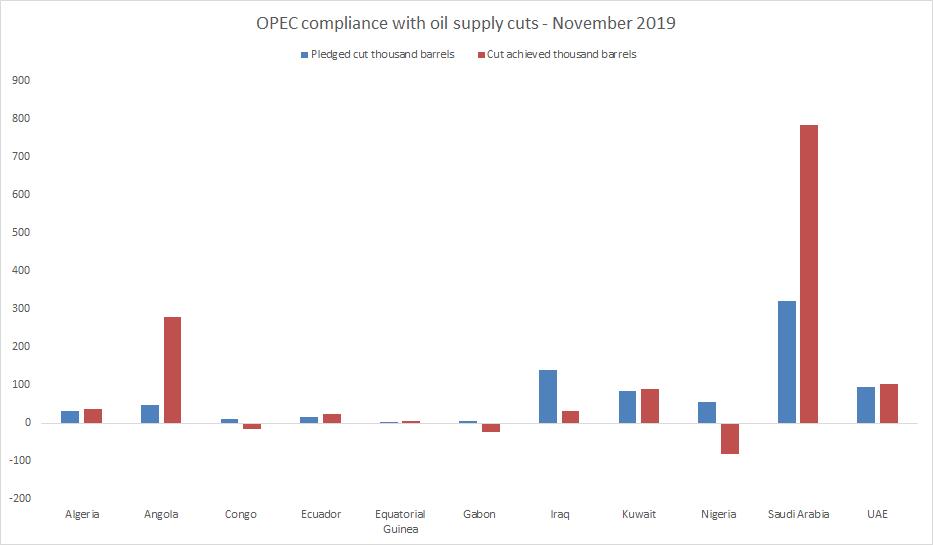 A recent survey conducted by Reuters found that OPEC oil output has dropped during the month of November from October by 110,000 barrels per day (bpd). The cause is from Angola Production fell due to maintenance, along with Saudi Arabia halted supply output before the initial public offering of state-owned Saudi Aramco.

OPEC, Russia and other non-members known as the OPEC+ agreed in December to supply 1.2 million bpd in 2019. OPEC’s share of these cuts is 800,000 bpd among to 11 participating in the deal.

In November, OPEC pumped 29.57 bpd, a reduction from last month’s outputs. OPEC meets next month to discuss the supply deals. Since the supply attack on Saudi Arabia oil plants, they have been pumping far less than an OPEC-led supply deal allows.

During the OPEC meeting on Dec 5th, delegates plan to extend the supply pact and possible discussions around supply cuts for 2020.

Oil LCOc1 has fallen to $63 a barrel after spiking to $72 which followed the September attacks on Saudi oil plants. The current price is less than many OPEC countries need to balance their budgets.

For now, the agreement among the 11 OPEC countries is in place until March of 2020. Compliance rose to 152% in November and the survey found from 135% in October. October estimates were revised up by 90,000 bpd due to new information about output in Iran and Ecuador.