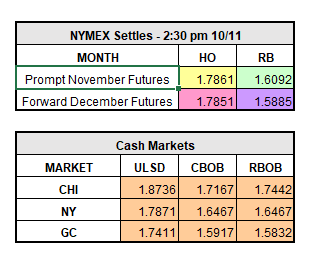 As for an update on OPEC, they are still expected to extend cuts beyond the initial expiry date of March 2018. It is still unknown how long they are expected to extend beyond this date. OPEC’s intention is to raise crude oil prices by cutting production, but production in the U.S. has kept a cap on any price increases. U.S. production will make any major uptick extremely difficult.

Gasoline prices are down 6 cents at the pump since last week, and now almost 20 cents lower than just one month ago. The average price at the pump as of Wednesday for regular gasoline is $2.478/gallon.