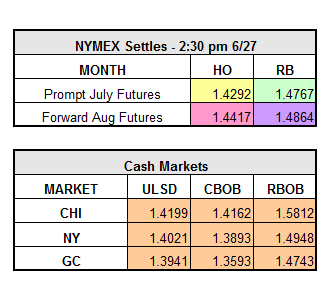 The market is recovering today, after three consecutive down days on crude and refined products. As of 12:15 p.m. EST, WTI crude is up $.80 while gasoline and diesel are up $.0215 and $.0196, respectively. Brexit caused the massive drop in oil prices since last Thursday, but what is causing this surge today? The leading headline today moving prices up is the threat of a possible Norwegian strike of up to 7,500 oil and gas workers. The union workers are demanding a new wage deal before midnight on July 1st. Canada, Nigeria, Saudi Arabia, Libya, and other oil producing countries have been flooding the news since the New Year, but Norway is sneaking into the scene today and putting a halt on the pricing plummet. The International Energy Agency reported that “Norway produced 1.96 million barrels a day in May, or about 2.1% of the world’s oil output.”

That is an eye opener if there ever was one. A country like Norway, not even in the top 10 world list of leading oil producing countries, is sustaining the market from falling further today. The voices of several thousand union workers were able to counter one of the most historic events in post war history (Brexit). That should tell us something, though. Unpredicted events, such as this Norwegian strike, can can significantly impact the market, and so can predicted events such as the OPEC crude freeze trying to strengthen the market.

Brexit is putting a huge burden on stock markets and is creating currency volatility around the globe. The U.K.’s decision to leave the EU caused a selling landslide, resulting in a record $2 trillion collapse in stock markets globally. Time.com made an interesting observation on what to keep an eye on in the coming months: “The folks who are telling us not to worry about the economic effects of Brexit on the U.S. have also missed a key, immediate impact of the decision – the Fed has kept interest rate hikes on hold in large part due to the turbulence abroad, and may be forced to do so now for much longer than it would like.” If the interest rate spike happens sooner rather than later, the U.S. dollar could continue to strengthen and cause prices to fall even more in the short term.