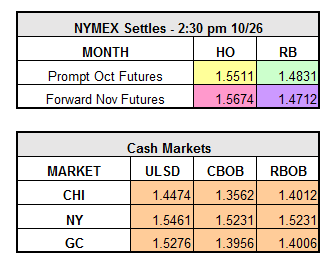 The market is stronger today on both distillates and gasoline, as well as crude. Distillates are up $.0265, gasoline up $.0065, and crude up $.78 as of 12:30 PM EST. This is mainly due to the Venezuelan political situation, strong Asian demand, and a report today from the Saudis stating a possible cut of its near record oil production by 4%. Sticking on the subject of crude cutting, Iran’s exports are projected to fall to a four month low in the month of November to 1.89 mbpd. Right around the same output, Nigeria reveals its output of 1.8 mbpd. The API’s were bearish Tuesday night, but the DOE’s gave some hope to oil bulls yesterday. Overall, OPEC’s decision November 30th will be the next big market mover, but it seems like moving crude prices substantially higher gets more and more difficult in a well supplied global market despite the rhetoric.