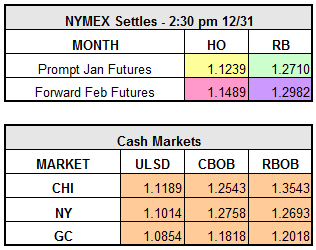 Crude futures can be seen on the rise this morning due in part to rising geopolitical tensions in the Middle East. Over the weekend, following the execution of a noteworthy Shiite cleric and a retaliation attack shortly thereafter, the Saudi government cut its ties with Iran. Consequently, WTI this morning is up $0.75 to $37.79 with heat and RBOB following suit up $.0273 and $.0362 respectively. However, “We don’t see geopolitical tensions having any kind of lasting impact on oil prices,” Eimear Daly, a currency strategist at Standard Chartered Plc in London, said in an interview with Bloomberg Television. “We’ve seen geopolitical tensions come and go in the oil price and we’re looking a lot more at supply and demand.”

Another year has passed, and a new year is in the works. However, it seems as though we are following the same story. We enter 2016 with clearer-than-day information that Saudi Arabia will not change their production strategy—just as we did in 2015. As 2016 begins, a contango (a situation where the future spot price is below the current price, and people are willing to pay more for a commodity at some point in the future than the actual expected price of the commodity) price structure exists in the futures market—just like there was last year. Finally, just like last January, a large crude surplus exists domestically, causing a shortage of on-land storage capacity with downward pressure weighing on global crude prices.

Will the new year bring a change of plot to this storyline?