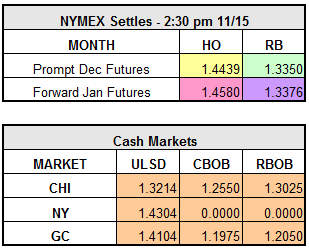 Oil markets had a significant rally yesterday, with crude oil closing up $2.49 to settle at $45.81 per barrel.  Heating Oil and RBOB also finished higher, settling at $1.4439 and $1.3350, respectively.  Yesterday’s rally was largely attributed to informal OPEC meetings that will take place later this week at an energy conference in Doha.  Of note is that Saudi Arabia’s Energy Minister may also meet with his Russian counterpart at this conference.  Although there is skepticism regarding a much talked about deal, this informal meeting could set the table for a more detailed and solid production freeze or cut agreement later this month.  OPEC will be having its next meeting in just two weeks on November 30th in Algiers.  “If OPEC would stick to its intention to set its production ceiling at 32.5 million barrels a day, or even lower, market optimism will likely pick up, which could be supportive for oil prices,” said one senior energy economist from ABN Amro.  He went on to estimate the likelihood of an actual OPEC production cut as 50-50.  In a long term bullish signal to the market, the International Energy Agency said today that oil consumption will continue to rise, peaking no sooner than 2040.  This forecast comes despite the Paris climate deal, whose goal is to wean the world off fossil fuels by the end of the century.

Currently, the market is giving back some of yesterday’s gains as the NYMEX has turned down in response to the API and EIA data, a higher dollar and the continuing questions as to whether any OPEC agreement will come to fruition.  Late yesterday afternoon, the American Petroleum Institute released its weekly data, showing a build in crude oil stocks of 3.6 million barrels (more than double the expected build).  In addition, distillate inventories rose by 3 million barrels, while gasoline stocks dropped approximately 155,000 barrels.  This morning the EIA reported that crude oil stocks grew by 5.3 million barrels last week, shattering expectations of a 1.5 million barrel rise.  Distillate stockpiles rose by 310,000 barrels and gas increased by 746,000 barrels.  Also noted in today’s report was that refineries increased output and U.S. crude imports rose last week by 910,000 barrels per day.