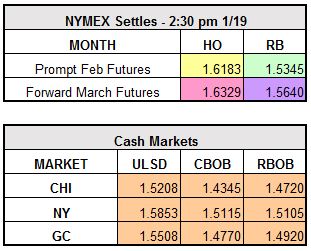 The market is rallying ahead of the weekend when OPEC and non-OPEC oil producers are set to discuss how they will monitor compliance of production cuts. It’s funny that they need to have this meeting even though the production cuts were supposed to kick in almost three weeks ago. According to Platts, analysts are expecting about a 60-80% compliance rate with the production cut targets. Again, OPEC has agreed to cut 1.2 million barrels per day and non-OPEC agreed to cut about 560,000 barrels per day.

WTI crude is trading up $1.35/barrel to $52.72 today with this, but there are significant headwinds ahead. Libya and Nigeria have both increased production over the past few weeks. Libya’s production has recovered to 722,000 barrels per day after falling to 655,000 per day earlier this week on poor weather conditions. Nigeria increased production 403,900 barrels per day last month as the oil infrastructure recovers from attacks by rebel militants. We will see January oil production levels within two weeks which will be very decisive for the oil complex’s market direction.