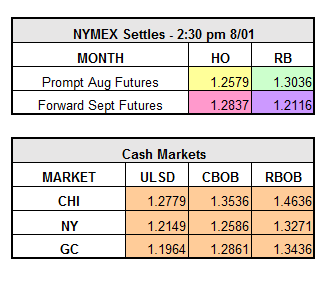 The market is continuing on the down-trend this morning, trading at a penny loss on refined products. Over the past two weeks, we’ve seen HO drop off by over 12.5 cents and RBOB fall by over 7 cents on supply glut concerns. Yesterday, HO settled down $0.0496 to $1.2579 and RBOB lost $0.0158 to $1.3036. September WTI Crude fell $1.54 to $40.06, falling below $40/bbl for the first time in three months. Despite a significant loss on the NYMEX, the Chicago cash market finished with gains on all products due to a multitude of refinery issues.

The market is losing interest in the $274 billion Japanese stimulus package approved yesterday by Prime Minister Shinzo Abe. As Japan’s largest stimulus program since the 2008 recession, the package seems substantial, however a deeper look shows the numbers to be less exciting. Low interest loans from government and state-owned companies will make up 75% of the package, leaving only $74.4 billion in new spending over the next couple of years.