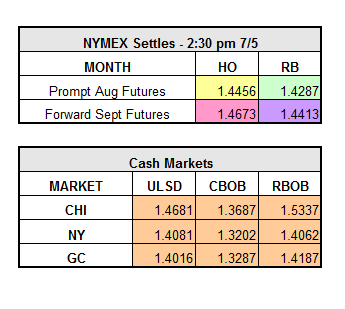 The Brexit vote has been adding pressure on the pound, which fell to a fresh low against the U.S. dollar yesterday. Additionally, data is expected to show a decline in Chinese industrial growth for June. Increased value of the U.S. dollar, ambiguity about the impacts of Brexit, and economic concerns in China are all adding to bearish sentiment. Further adding pressure on the market is the mounting supply picture. At 32.82 million bbls, June output for OPEC is at a record high. Output is predicted to have increased in the Gulf as well, while supplies are recovering in Nigeria following militant attacks.

Typically, oil prices tend to fall off in the second half of the year after hitting their peak in mid-June, due to weakened demand. While the past several EIA reports have shown record demand and consumption, this data may prove to be misleading. Contradicting the EIA numbers, demand surveys for the first half of the year from OPIS, U.S. Commerce, and the California Board of Equalization show only a small increase in demand of between 0.5% and 1.7%.

The news isn’t all bearish. Adding to bullish market sentiment is an expected seventh consecutive weekly draw in US commercial stocks, along with the rising threat of a strike following Norwegian oil service workers having failed to reach a wage agreement.