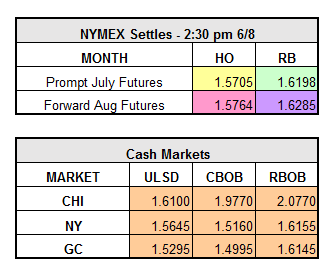 Yesterday, HO finished up $0.0290 to $1.5705 on the NYMEX, RBOB settled up $0.0327 to $1.6198, and July WTI crude settled at $51.38/bbl, an eleven month high. Gains yesterday were largely driven by US crude draws and a weak dollar. The market is recovering today from yesterday’s gains, with HO currently trading down $0.0150 and RBOB trading at a loss of $0.0093. Weak job data for May, increased rig counts, high refined product stockpiles, and production outages ramping back up are putting pressure on the market today.

US crude inventories drew for the third consecutive week, at a fall of 3.2 million bbls, including a 1.36 million bbl draw in Cushing. This draw is mostly attributed to higher refinery runs and a drop in crude oil imports. Refined products, on the other hand, had a higher than expected build of 1.8 million bbls for distillates and 1 million bbls for gasoline inventories. US gasoline and distillate demand has fallen 600,000 bpd, which probably aided the build.

What other factors could affect the market this time of year? The past few years have shown lower-than-average hurricane activity. The last hurricane to hit land was in 2014, and forecasters believe the current drought is the precursor to an anticipated active hurricane season, potentially putting the US Gulf Coast at risk. At the epicenter for offshore crude production, the Gulf Coast is also the largest entry point for oil imports and houses 45% of US refining capacity. We have reportedly been experiencing the most severe El Nino weather pattern since 1997, which may soon be replaced by La Nina.

Reported refinery and supply issues at Marathon’s Detroit Michigan plant and ExxonMobil’s Joliet Illonios refinery have prompted Chicago to become the most volatile market in the nation. We’ve seen huge gasoline jumps the past few days, with CBOB soaring 24 cents to $1.9770 and RBOB jumping 27 cents to $2.0770. These prices are about 30-40 cents higher than the rest of the US.