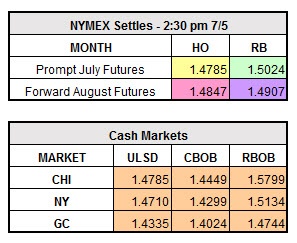 OPEC exported 25.9 million barrels per day in June, about 450,000 bpd more than the month of May, marking a second consecutive month of increases.  Another piece of information to note is that the US drilling rig count was down this past week for the first time in six months.  It will be interesting to see if this is just a one-time occurrence or will continue into a downward trend.