Early this morning the market looked like it was going to lose some of what it gained over the past three days, but this assumption was soon proven false. Keep an eye on the market if you step away from your desk even for a moment because it has already jumped up a penny.  An important note to make is that the U.S. Dollar is up along with the futures market.  This comes as a surprise because the two are normally an inverse relationship.  It would not be shocking to see the market lose some of its momentum as the day progresses.  The market closed up across the board yesterday, April Ho up 0.0258 to $1.5425/gal, April RBOB up 0.0371 to $1.6720/gal, and WTI Crude up $1.14 to $49.51/bbl.

Overall the DOE’s were bullish. Gasoline drew by 3.75 million barrels last week, more than the expected 2 million barrel draw.  This is likely due to the clearing of higher RVP gasoline.  Distillates drew 2.48 million bbl which was right in line with the API’s.  The biggest surprise was the draw in Cushing, Oklahoma by 220,000 bbl, which put a halt to four straight weeks of builds.

As for an update on OPEC, they still have not come to a decision. If OPEC does extend the production cut, it is likely that oil prices will rise, and if OPEC decides against an extension then prices will either fall or will be stuck at a stalemate.  It will be interesting to see where the market heads as we enter the 2nd quarter of the year in the next few days.

In other news of relevance: 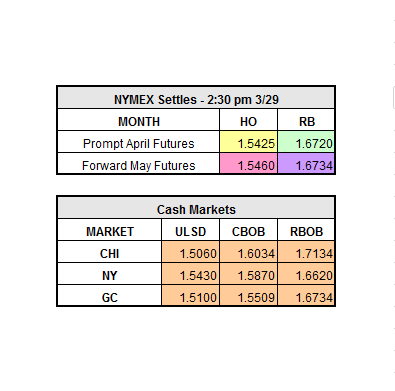