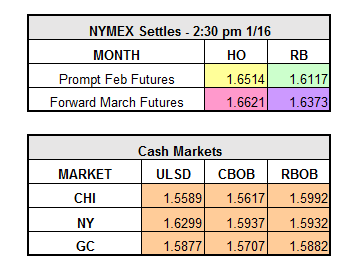 Crude oil has been up this morning on WTI and so have products on the NYMEX. Why you ask? The dollar has been down and Saudi Arabia confirmed that they would continue to cut production as planned.

What might be affecting the U.S. Dollar Index today? Donald Trump announced that the strong greenback was hurting U.S. competitiveness.  How could a strong dollar affect oil trade? When a country wants to buy U.S. crude, it will have to pay for it using U.S. currency.

Even if the United States and its exports are competitively priced, the strength or weakness of the dollar still should be taken into account. Why would a particular nation purchase from the United States when it can get the same thing for less from a nation whose currency costs less to use?

According to IEA executive director Fatih Birol, oil prices are expected to weaken sometime later in 2017. He recognizes that OPEC production cuts in 2016 were the driving force for the hike in oil prices, however he believes that 2017 will not continue on the same path.

Birol expects nations like the United States to fill the void wherever production is being cut. If a nation like Saudi Arabia decides to cut (x amount of barrels per day), then he assumes other nations will increase production by that amount.