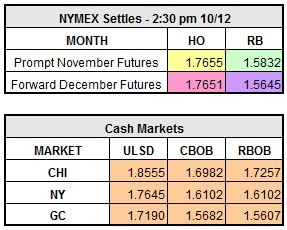 The oil market has found a bid today on the heels of strong Chinese oil import demand, continued strife in Iraq, and international traders covering shorts after yesterday’s DOE report.

China imported 9 million barrels of oil per day in September, after it averaged 8.5 million barrels per day year-to-date. As the world’s largest oil importer, it clearly illustrates that oil demand is on the uptick and is contributing to today’s rally.

Also contributing to the rally is the continued strife between the newly-voted independent Kurds and Iraqis over the oil-rich territory. Local Iraqi television reported that tens of thousands of Kurdish fighters were sent to defend their region from outside threats. Iraq does not want to lose control of approximately 600,000 barrels per day of oil production for obvious reasons.

Another component giving oil a bid today is international traders buying up their shorts from Wednesday night after the bearish API data was released. The DOE report yesterday showed a draw in crude oil as one of the bloggers Gabreal Preisendorfer noted yesterday, and so traders that were short were forced to buy positions back, especially with the bullish headlines this morning.

On the weather side of things, yesterday the U.S. Climate Prediction Center said there is now a 67% chance, up from 61%, of a weak La Niña occurring between December and February. During a La Niña, sea surface temperature is cooler-than-average in the Eastern Central Pacific Ocean. This typically makes the upper Midwest into New York see temperatures that are cooler-than-average. With the increasingly tighter distillate supply situation, a colder winter may potentially mean higher prices for heating oil relative to crude oil prices (crack spreads).

One more note on weather during this lovely Friday October the 13th, Accuweather reported today that conditions are still favorable for more tropical storms and hurricanes to develop within the coming weeks. Hurricane Expert Dan Kottlowski noted that “since the satellite era began during the early 1960s, 2017 is the only year where there have been 10 consecutive hurricanes in the Atlantic basin.” Hopefully we are done setting records in regard to this, but it is prudent to know that the season is not over yet.