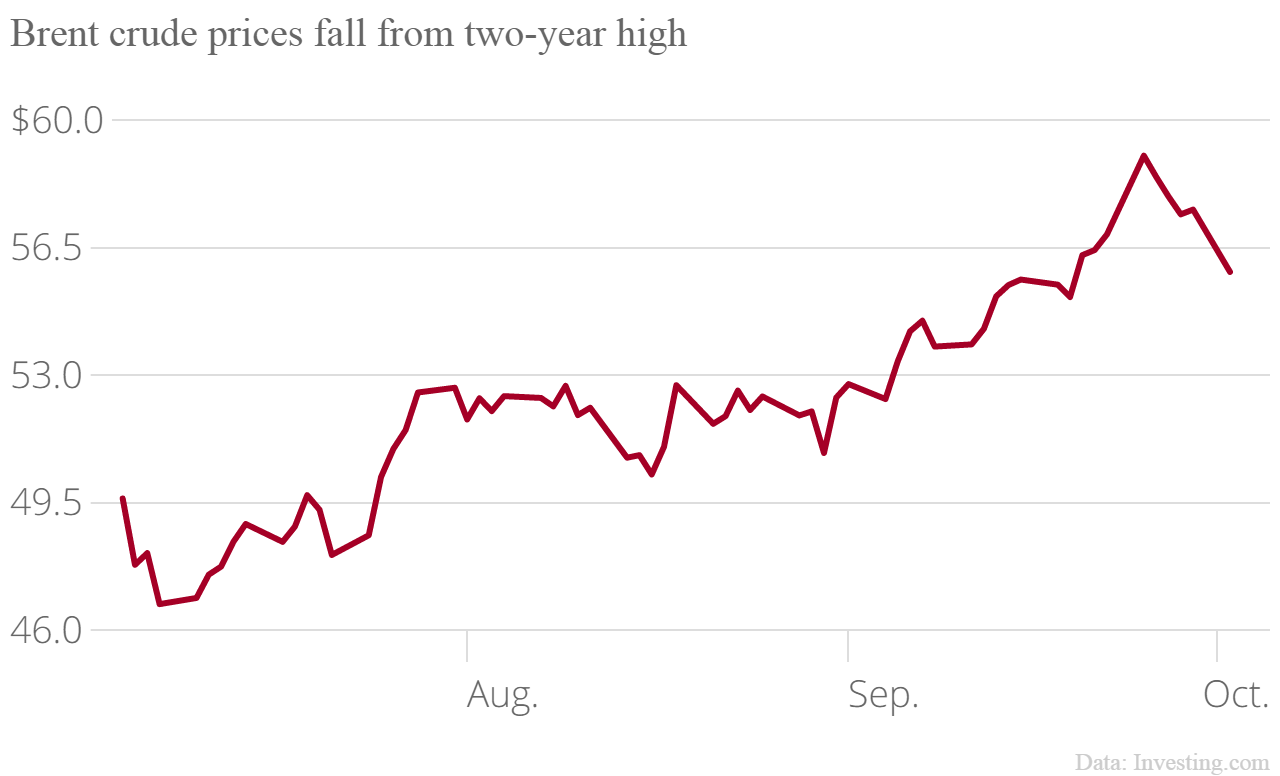 The oil markets are taking a much needed breather this morning and are lower by about 2% after Brent crude had posted its largest third quarter price increase in 13 years. Multiple factors are in play putting pressure on the energy sector.  The first factor is the stronger U.S. dollar.  With the dollar strengthening, oil prices will in-turn feel some pressure and weaken.  According to MarketWatch, the relationship between oil prices and the dollar is described: “As oil is priced in dollars, it becomes more expensive for holders of other currencies as the greenback strengthens.”  MarketWatch goes on to say, “It is not surprising to see some investors taking the chips off the table especially given the stronger dollar and possible higher U.S. oil production going forward and definitely OPEC’s production increases as well.”

One reason this is coming into play now is due to the news of OPEC’s compliance falling to 86%. A Reuter’s poll reveals that OPEC’s production has risen by roughly 50,000 barrels per day.  The production increases came mostly from Iraq and Libya according to the Reuters poll on Friday.  Although this had an impact on the market, Libya’s largest oil field, Sharara, as of yesterday has been shut down yet again thwarting their production output.  Despite the Libyan oil field shut down, the less than stellar production cut compliance of OPEC and the rising U.S. shale production, 2018 appears to have an even tougher road ahead to reach the $60 level.  If OPEC is to have any chance at slowing down this bearish tone in the market, a strong message to the United Arab Emirates, Iraq, and Ecuador needs to be sent in regard to their compliance levels having dipped to roughly 30%.

This tug-o-war will only continue during the upcoming year if OPEC does get their production cuts back on track, and within acceptable compliance levels. The increase in oil prices only promotes more growth within the U.S. shale fields.  As oil prices rallied last week, the Baker Hughes oil rig count had increased by six wells bringing the total to 750 in the U.S.  Also, to compound the bearish tone, the IEA expects the U.S. to boost production next year by roughly 1.1 million barrels per day.  Keep in mind that this time last year the U.S. had a total of 425 oil rigs in operation.  This is the first week of increases in rig counts since the middle of August.  So, given the new cost saving efficiencies in the oil fields and if crude prices continue to stay bid, those rig counts should continue to rise.

Lastly, on Sunday, India had received one of its first U.S. crude oil shipments since 1975. The U.S. crude had made its way from the Gulf Cost refinery on August 19th and arrived October 1st on a 1.6 million barrel parcel aboard a state owned Indian Oil Corp vessel.  The Indian Oil Corp, or IOC, is the first public sector refinery to bring in U.S. crude and has placed an order for 3.9 million barrels from the U.S. in the future.  With more crude being purchased by other Indian state-owned entities, the total amount contracted from the U.S. will total just shy of eight million barrels.  The U.S. embassy stated “US crude oil shipments to India have the potential to boost bilateral trade by up to $2 billion.”  On top of this, it is being reported that Indian companies are heavily invested into U.S. shale to a tune of roughly $5 billion.  This investment into the U.S. shale comes with an LNG contract of 5.8 million tonnes.  The first delivery of liquefied natural gas is said to deliver in January 2018 to India.  U.S. Charge d’Affaires for the U.S. embassy is quoted as saying “The United States and India are elevating our cooperation in the field of energy, including plans for cleaner fossil fuels, renewables, nuclear, and cutting edge storage and energy efficiency technologies. We look forward to working together on further sales of US crude and exploring opportunities to expand the role of natural gas in India.”