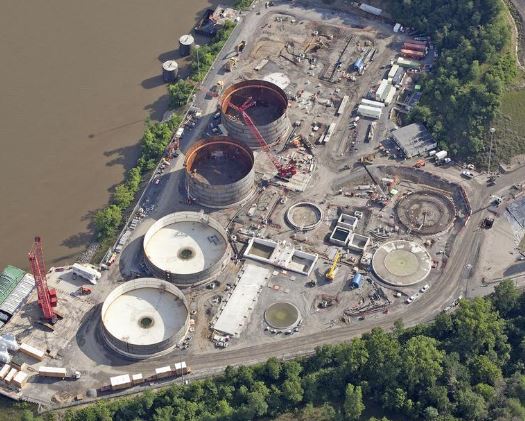 The site will house four processing units, the ethane cracker plant itself and three polyethylene units. Part of the final phase of construction will include a 900 foot long cooling tower, rail and truck loading facilities, water treatment plant, office and laboratory. Along with Shell’s plans to build a 250 megawatt electric generating plant, that will provide all of the electricity needed at the facility powered by Marcellus Shale gas.

Since the start of construction in November of 2017, Shell has almost all foundation work on the site completed says Joe Minnitte, external relations advisor and spokesman for Shell.

Right now 40 cranes stand visibly on the site, ranging in all sizes that tower over the site. In the months to come Shell is expected to have on site the third-largest crane in the world.

“If someone were to say ‘what do you have going on down there,’” Minnitte said, “we have begun the vertical build of the plant and ramping up the workforce to the eventual 6,000 workers that will be on the site during construction.”

Minnitte said the project is expected to reach peak employment sometime next year.

Several pieces of the plant already have been delivered by barge, including the football field sized quench tower, measuring 288-foot-tall, 29-foot-diameter, 2,000-ton, the single-largest delivery in the project. A large crane, measuring upwards of 300 feet tall, will be used to lift it into place, Minnitte said. When in place, the quench tower will be the tallest piece of equipment in the skyline as well as the heaviest column on site.

Further construction will eventually include the installation of pipes, towers, equipment, electronics and lights to make up the remainder of the facility with expected completion by 2021.

Next time you are in Beaver County crossing the Ohio River on I-376, you can get a first-hand view of the cracker construction.