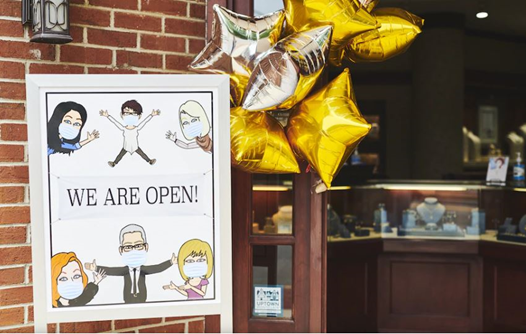 In May, U.S. retailers were happy to report that since the reopening after the shutdown from the coronavirus pandemic, retail sales jumped a record high of 17.7%. The rebound in sales reflects the gradual lift on businesses after two months of stay at home orders. With the increase in consumer demand, the federal tax payments and unemployment benefits also helped with the increase in sales.

Auto sales grew by 44% based on retail reports which generates about one-fifth of all retail spend. Excluding auto sales, retail sales grew by 12.4% over the previous month.

After Americans have been confined to their homes for so long, we saw an increase in gasoline sales by 13%. Bars and restaurant receipts had an increase of 29% after being hit hard in March and April. However, food-service sales were still down by 40% during the month of May, with many restaurants having to adapt to social distancing requirements and being forced to permanently cut staff.

Internet retailers grew their sales by 9% during the pandemic, while grocery stores reported a much smaller gain of 1.3% after a record high in April of 14.4%.

Even though retail stores show an increase in sales, unemployment is still at a record high with 20 million Americans without jobs. U.S. employers added 2.5 million jobs in May, economists say there is still ongoing uncertainty about the public health crisis. It is uncertain to know when the economy will return to spending levels as measured in the past few years.