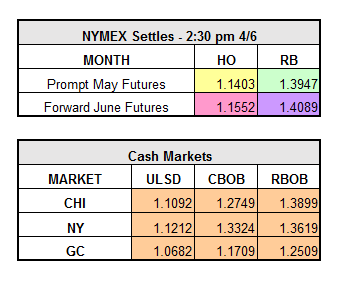 Yesterday, EIA data showed an unexpectedly large 4.9 million bbl draw in U.S. crude stockpiles, the largest decline since January 1. This was fundamentally driven by a substantial draw in the Gulf Coast due to refinery utilization reaching 95% of capacity, as well as a drop in imports. The large draw contributed to the market spiking to its largest one-day rally in three weeks, with HO settling up +0.0657 to $1.1403 and RBOB settling up +0.0169 to 1.3947. WTI crude futures settled up $1.86/bbl, to $37.75/bbl.

In refined products, gas and distillates showed a build of 1.43 million bbls and 1.79 million bbls, despite PADD 1 showing a weather/demand-influenced draw of 3 million bbls on HO. The market is currently trading down about two cents on both HO and RBOB.

A small spill on Saturday near Freeman, SD caused TransCanada’s Keystone crude pipeline to delay operations until Tuesday of next week. Previous estimates indicated the pipeline would be operational by the end of this week. The pipeline exports about a fifth of Canadian crude to the U.S., and the shutdown has caused a back-up in crude supplies in Canada. This is a major interruption to crude oil shipments south from Alberta to Cushing.

So far in April, Iraqi crude oil exports from its southern ports have averaged 3.494mpbd, an increase of about .208mbpd since last month. Iraq plans to lower the oil price forecast in its 2016 budget to about $32 a barrel from $45.