The spot natural gas price in New England soared to an average of $20.55 per million British thermal units (MMBtu) in January 2022 as reported by the Algonquin Citygate, the benchmark for natural gas prices in New England and a trading hub.  This is the highest average price since February 2014.  With a cold start to the year, consumption in the region is up over 10% from prior years.

On January 31, Northeast prices skyrocketed to $30.50 MMBtu.  “This is an absurd price, in line with what Europeans, facing their worst energy crisis in a generation, have been suffering in recent months. To put it in context, $30.5 per MMBtu is the equivalent of paying $180 for a barrel of oil (double what it is today), or 20 cents per kilowatt-hour for electricity. In other words: nuts.”[1]  Today, the Henry Hub natural gas spot price opened at $4.28 MMBtu.  New England’s power grid is currently running on over 50% natural gas with the remainder of the mix including oil, nuclear, renewables and hydro power.  Less than 1% of power generation is from coal.

Without pipelines from Pennsylvania, New England is forced to rely on the international market for its natural gas supply.  Liquified Natural Gas (LNG) is shipped on cargo ships throughout the world and often are rerouted to the highest bidder.  “Over the past month, two-thirds of American LNG exports went to Europe. Some ships filled with LNG were heading to Asia but turned around to go to Europe because buyers there offered to pay higher prices, S&P said.”[2]  With no pipeline access, the region is excluded from taking advantage of the prevalent natural gas produced around the country as the U.S. continues to be a net exporter. 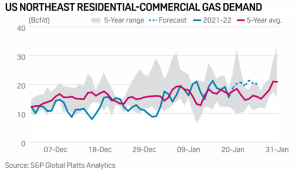 As demand in the Northeast remains high, the forward gas market remains bullish as the region prepares to import more international LNG cargoes.  “Despite more than $50 billion of recent investment into LNG liquefaction plants in Texas and Louisiana, you won’t find any American freedom gas being delivered into Boston. Instead, because of a law called the Jones Act (which requires ships carrying goods from one U.S. port to another to be U.S. owned and flagged), the gas that lands in Boston historically has been sourced from fields in Trinidad & Tobago, Norway, and Russia.”[3]  With the region’s reliance on Russian imports, developing tensions between Russia and Ukraine could continue to drive up prices.

Russia relies on energy exports, it supplies around 35 percent of the natural gas to Europe, and Moscow has indicated the potential to not ship natural gas, via pipeline, across Ukraine to Germany.  These actions would be in retaliation to sanctions imposed from both the U.S. and Europe.  More than 100,000 Russian troops are positioned at borders for a potential invasion of Ukraine.  Ukraine’s Ministry of Defense is currently declining to comment but has been actively training their military.  However, analysts predict that Ukraine’s capital would likely fall within days when faced with the heavily armed Russians, the world’s second largest military.

Growing international pressures combined with the geographically stranded New England region leave many Americans’ paying much more than they should for heat this winter and for years to come.