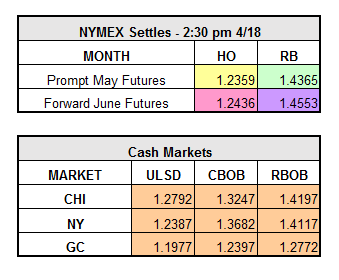 This morning the market appeared to be indecisive, as bearish sentiment following Sunday’s “no freeze” decision in Doha was not enough to drive a collapse in oil prices. The market is now trading up 4 cts on HO and over 5 cts on RBOB.

An oil workers strike on production facilities in Kuwait dropped output from 2.8 million bpd in March to 1.1 million bpd on Sunday. 13,000 union members are protesting public sector pay reform and benefit cuts. However, the significant fall in Kuwaiti oil production is only expected to last temporarily, as we are now in day three and more operations are already back online. Further, exports from the country do not appear to have been impacted by the strikes. The government is likely to compromise with workers, and negotiations are set to take place over the next 10 to 15 days. Once production is back to normal, oil bears expect prices to teeter near $35/bbl support again.

Pipeline vandalism and destruction of oil and gas facilities in Nigeria has caused crude oil production to fall by 67,000 bpd in the country last month, along with huge revenue losses. Angola has now overtaken Nigeria as Africa’s largest producer of crude oil. This, along with a weak dollar, US oil rig cuts, shale production declines, and generally optimistic economic news are other bullish factors driving oil prices. API data released at 4:30PM today and DOE stats at 10:30AM tomorrow morning will better indicate how this news will drive the market.