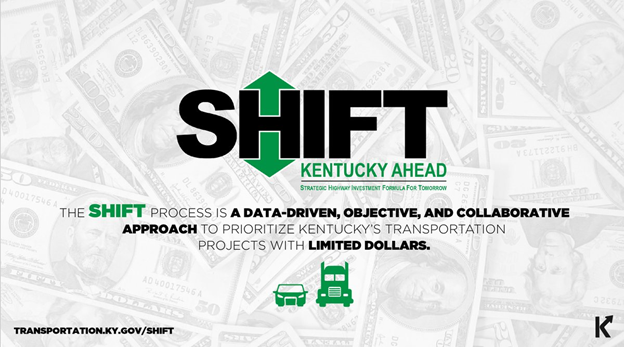 Kentucky Trucking Association President, Rick Taylor is one of many Kentuckians who feel there is work to be done in many of the freight corridors in the state. On June 25th, the Kentucky Transportation Cabinet unveiled a list of projects that will be considered for 2020. According to Eleanor Lamb of Transport Topics, this list was derived from the State Highway Investment Formula for Tomorrow, otherwise known as “SHIFT”. “SHIFT helps officials prioritize transportation projects, and will inform the upcoming 2020 Highway Plan. SHIFT uses data on safety, asset management, congestion, economic growth and cost-benefit ratios to assess projects.”

Some of the more urgent projects include the widening of the two major interstates in Kentucky, 75 running North-South and 64 running East-West. Taylor describes these two interstates as “important freight routes” and it would help the trucking industry immensely. Of course this project and all the others are in need of one thing, funding. Kentucky has an opportunity to create additional revenue for transportation projects through an increase in fuel taxes. Currently their excise tax rate on gasoline is 24.6 cents per gallon and on diesel it is 21.6 cents per gallon. Taylor also described Kentucky as being “on an island” as its neighboring states (Ohio, Indiana, Tennessee) which have seen fuel tax hikes in recent years.

Another project SHIFT has identified as high priority is the improvement of the Brent Spence Bridge, which connects interstates 71 and 75 from Kentucky to Ohio. Lamb reports that “this bridge originally constructed in 1963 was designed to accommodate 80,000 vehicles per day but is currently carrying twice that volume.” She estimates out of all of the daily passages nearly 27,000 of them are made by trucks and yearly amounts of freight transported by these trucks amasses over $417 billion. As someone who travels this bridge daily, I can attest improvements and even an additional bridge would certainly increase the traffic flow which would lead to less congestions and potentially less accidents. Funding for the bridge is of course the huge issue. Tolling is a common option to provide additional revenue for bridges and roads but in this instance it is not an option. In 2016 Kentucky Governor Matt Bevin signed a law stating tolls can’t be a part of any project connecting Kentucky and Ohio without the Kentucky General Assembly’s approval.