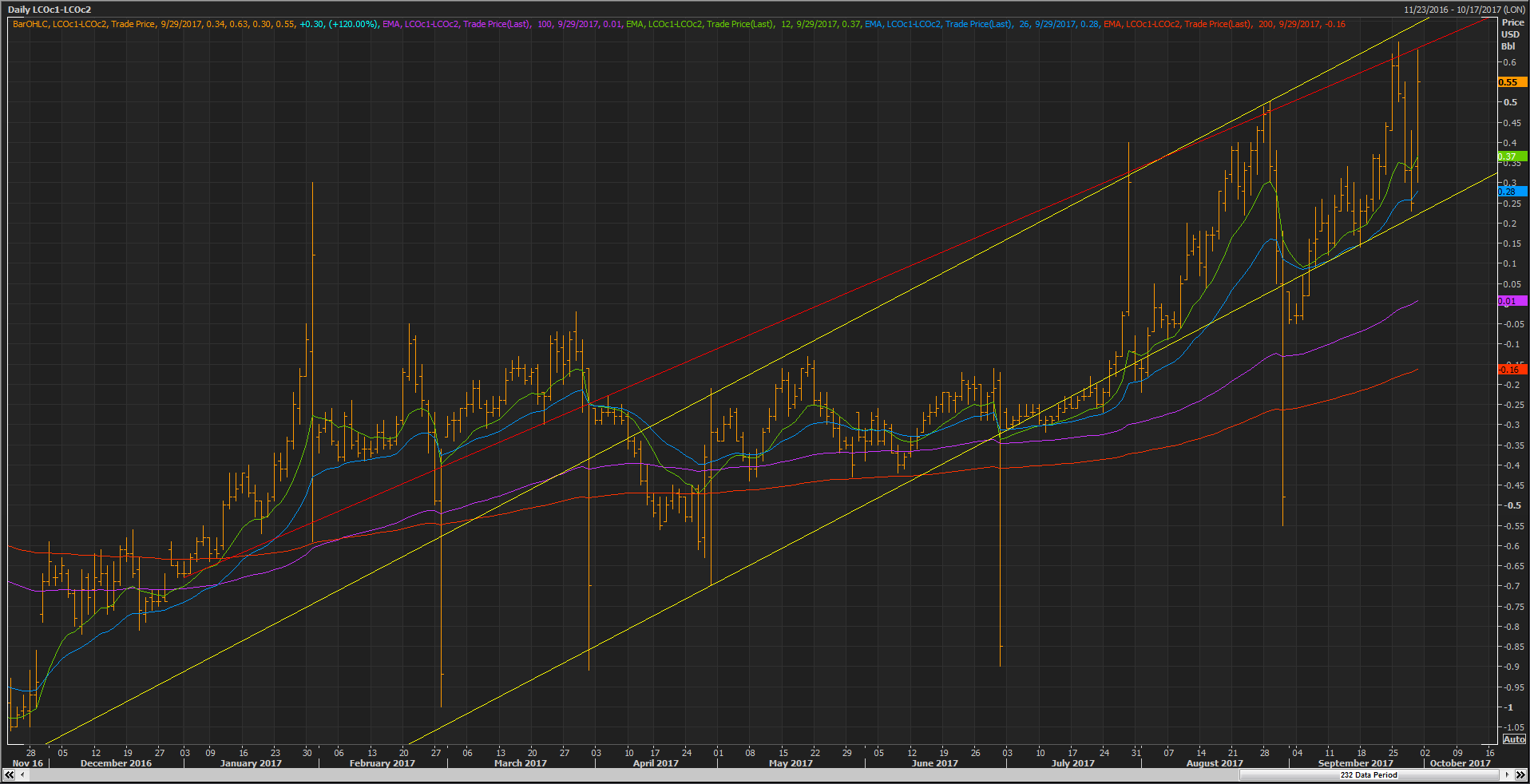 After posting a down day across the board in the energy sector yesterday, this morning’s activity is trending lower in early trading.  Yesterday’s settles saw crude drop $0.58 to finish the session at $51.60, while the refined products closed off $0.0143 and $0.0222 for Heating Oil and RBOB to finish at $1.8320 and $1.6318 respectively.  Today marks the last day of trading for the October RBOB and HO contracts, which is being reflected by lighter than usual trading volume.  Brent crude is now in backwardation while domestically, WTI has flattened somewhat from a contango market.  As per prior blogs, backwardation and contango are defined as the markets view of future prices relative to current spot prices.  Below is a chart of Brent crude oil 1st vs 2nd month continuation chart:  Steady march upward from a contango of $0.68 under to a backwardation of $0.65 over.

As always, no one knows what lies ahead and depending on which news articles you read or what industry “expert” you follow, outlooks can vary wildly.  For example, take two industry articles circulating online today: “Oil could soon overtake its 2017 highs” and “U.S. shale hinders hopes for oil market rebalancing.” In the first article, an analyst is quoted as saying “Investors have really gained confidence in oil after OPEC cuts that were originally discussed earlier in the year are starting to take shape here and oil production is being curbed.”  The article goes on to detail its rationale of production cuts and growing demand in its projection of $55-$60 per barrel by years end.  In the second article, the headline support comes from data showing U.S. shale production being set to rise for the 10th consecutive month in October.  It also goes on to quote a commodity analyst saying “we expect higher output from shale oil, Libya and Nigeria which will remain the main threats to OPEC efforts in limiting global supply.”  The same analyst concluded that “given its sensitivity to U.S. futures prices, shale oil will represent the most effective tool of the rebalancing process and will contribute to keep crude prices in a relatively narrow range.”  As one author of an industry newsletter recently stated “remember – no one on the planet knows which way the market will go from here.”