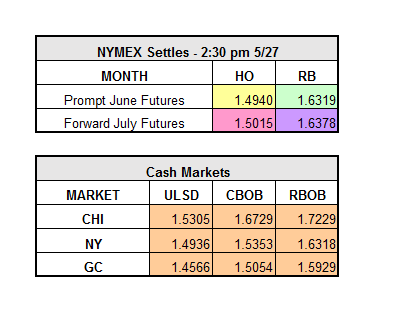 To start things off, I hope all of you had a great weekend with your families and an even better Memorial Day yesterday. Memorial Day is a day to remember the fallen and to think about why we were able to grill out with our friends and family, go boating, and have a great time yesterday. Every single day we wake up should be Memorial Day. One quote that is a personal favorite of mine was John F. Kennedy’s best quote from his 1961 inaugural address: “Ask not what your country can do for you, ask what you can do for your country.”

As May comes to a close, let’s recap how tumultuous this month really was. Crude was sitting around $45 a barrel on May 2, and the market and worldwide news seemed to be giving off bearish sentiment. The Kuwait strike ended and there were rumors of increased crude supply in Cushing and more rumors of increased production by OPEC. OPEC hit its highest level of production since 1989 at 33.217 mbpd. Things seemed to be going well for some industries and consumers that enjoy a falling market, until disaster struck. Wildfires in the heart of Canada’s main oil-producing region caused evacuations and shut downs. It was known that this was going to cause long term effects on inventory levels stateside throughout May. On May 16, Goldman Sachs stated that it was raising its March crude price forecast for WTI from $45/bbl to $50/bbl for the second half of 2016.

Goldman Sachs has been spot on, so far. WTI crude hit $50/bbl during the early morning of May 26, and today it is hanging right around $50, currently at $49.91 as of 10:00 a.m. EST. May’s lowest WTI level was around $43.25 on May 10. Since then, we have seen a consistent rise in WTI, hitting $48.50 around May 18, and reaching $50 on the 26th as stated above. As we continue to go day-by-day thinking of the tantalizing thought of crude dropping to $26/bbl on the NYMEX back in February, there are still bearish signs that can soften the market toward those levels. OPEC meets on Thursday, June 2, and there is little expectation of an announcement of an agreed production cut. If nothing comes from that meeting and Saudi Arabia/Iran add another 500,000 bpd of production between the two of them, that could affect the market as their production could reach the 33.5 mbpd range. Also, once everything cools off in Canada, supply disruptions could cease, impacting inventory levels.