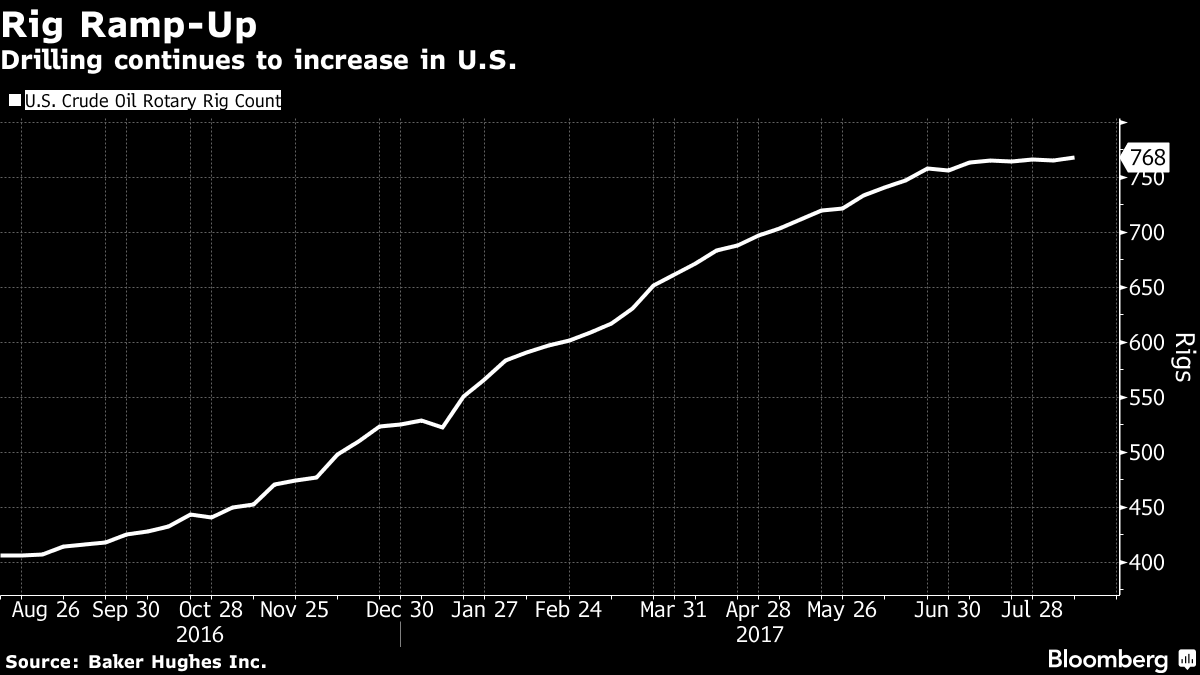 The market, yet again, is in flux on what to do, given all of fundamental factors playing into it. Let’s start out by taking a look at China.  Given China’s status as the number two consumer of oil products, it is very pivotal news that they had processed roughly 500,000 barrels per day LESS in July than they had in June.  The Chinese processed 10.71 million barrels per day, and this marked the lowest amount of product refined in a month since September of 2016.  This is worrisome, to the bulls of the market, given the experts did not project this big of a drop off in demand for the second place oil consumer.  When you combine a lackluster demand on the Chinese side of the world with an increase in U.S. production and rig counts, we are yet again faced with the question of “Will we move towards an even more extensive supply overabundance?”  Baker Hughes data showed an increase in oil rigs of three last week but reported a 5 rig decline, in total, when including natural gas rigs as well.  This marks the second time in three weeks that we have increased our levels of oil specific rigs within the U.S.

Given OPEC’s recent meeting and hoop-la they have released, we have seen signs of the market responding in a bullish manner but the sustainability of it is questionable. We tested the $50 a barrel figure last week and Reuters reported “Breaching this threshold has meant more money managers are betting on further gains in Brent, with the latest ICE exchange data showing investors last week raised net long holdings of the commodity by the highest amount this year.”  The U.S. took a different/bearish stance last week and cut net long crude positions, showing their less than confident outlook on what the market is doing. But where is this lack of confidence coming from this week?

A continued look at Libya is showing that they are more motivated than ever to reach pre-war oil production levels of 1.5 mbpd. Their oil production exemption status is serving them well given they have been able to increase production by nearly double since last year and have reached a four year high of 1 mbpd in July.  This means that they have been able to put themselves on pace for reaching their target year-end goal of 1.25 mbpd.  It is important to point out though that this is not a 100% guaranteed product to hit the market.  At any given moment Libya’s/Africa’s largest oil field can be shut down due to radical militant groups or radical terrorists currently living within the Libyan country.  Fears have brewing that as Iraq and Syria have made progress with driving out ISIS militants, Libya has had far less luck and the instability of security is a crucial point of focus on Libyan oil production moving forward.

Lastly we are seeing the stock market begin to react positively today to what appears to be a softening of the threat of nuclear war between the U.S. and North Korea. Although tensions remain in place within the Venezuelan conflicts currently going on, the threat of nuclear war outweighs all military options mentioned within the Venezuelan borders.  The unpopular leader of Venezuela seems to have received what he was looking for from President Trump, in regards to the military options Trump put on the table for discussion, by claiming the U.S. is just after Venezuela for their oil.  This is the rhetoric he is preaching to the country and doing whatever he can to gain support.  The country remains divided and unstable as protesting continues, more than 120 citizens have been killed and the longing for stability becomes more and more apparent from the residents of Venezuela.  As discussed in previous weeks, the loss of Venezuelan crude within the market would NOT have a major impact on the global oil market but within the U.S., given we are the largest importer of their heavy crude they produce, we could begin to see pricing impacts at the retail level.