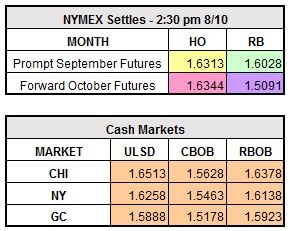 Oil markets were mixed on Friday as traders appear to wait for the next set of news headlines in order to find price direction. This comes after the wild swing yesterday when prices first appeared like they wanted to stay above $50, but the “algo” computers quickly sold it off amidst an array of bearish news which is signaling the market could be getting toppy. WTI settled at $48.59/barrel yesterday.

The first reason for the downturn yesterday was that the EIA reported that OPEC’s July production was pegged at 32.84 million barrels per day, up 0.230 million barrels per day from June. With that, total production cut compliance stands at 75%; the lowest since the round of cuts first took place in January. We also heard some puzzling comments from Russian oil producer Gazprom Neft. It considers it “economically feasible” to produce more oil again. This completely contrasts the results of the OPEC/non-OPEC meeting earlier this week in Abu Dhabi, which is a bit of a head scratcher. Another reason for yesterday’s slide in oil prices was the uncertainty over the situation with North Korea. This dragged down equities for the market’s worst trading day since May.

However, equities are getting a bounce today after The Global Times said in an editorial that “if the US and South Korea carry out strikes and try to overthrow the North Korean regime and change the political patter of the Korean Peninsula, China will prevent them from doing so.” The Global Times is not the Chinese government directly, but it is a state-run newspaper which normally writes on behalf of the government. It also stated that China should remain neutral if North Korean launches a pre-emptive strike on the U.S. Therefore, it appears that the U.S. has more to lose if it launches an attack first, which is providing reason for the equities markets to breathe slightly easier today.