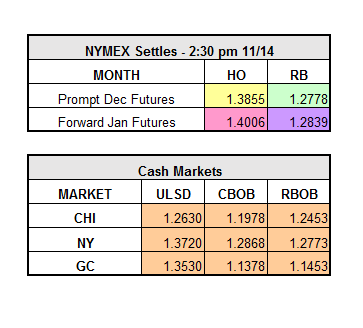 OPEC is back at it again with renewed hopes of an agreement to cut production. Oil prices fell to three-month lows yesterday, which also added to today’s overall support on crude and refined products. As of 12:00 PM EST, heating oil is up $.0450, gasoline is up $.0400, and crude was at a low of $43.55 on the day but is currently up $1.91, reaching $45.24. OPEC is still set to meet on November 30th, and the Saudi Energy Minister is set to travel to Doha, Qatar this week to meet with oil-producing countries. We have witnessed this before though.

It seems like just when OPEC has an agreement in place something changes and nothing happens. In this case, the opposite is happening. Keep in mind in September a plan was worked out but there are many outlying details that are going to be challenging and could thwart any plans to cut. That slowed the news down a good bit, but apparently yesterday brought new actions and Bloomberg reported “The behind-the-scenes diplomacy comes after bilateral meetings over the weekend failed to resolve the rifts, leaving just two weeks to finalize an agreement before the Nov. 30 ministerial meeting in Vienna, according to the delegate, who asked not to be identified because the discussions are private.” It appears that Qatar, Venezuela, and Algeria were leading the pack to persevere through any boundaries that still exist between the world’s largest oil producers. That sparked the market heading into this morning and it has stayed strong since opening. Since the election is over, all eyes are on OPEC. Question is, what is OPEC going to do? With only two weeks left and still some challenges ahead, it doesn’t look very good.