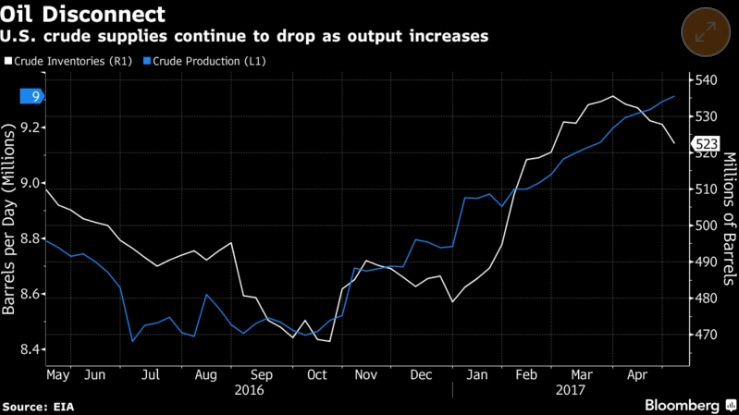 As mentioned in yesterday’s blog, there was a large draw in crude yesterday and we are seeing the market react to it today. A disconnect between supply vs. output has developed and is shown in the chart below.  Production is continuing to rise and crude inventories are falling suggesting that there is strong demand.

Contracts are continuing to recover after the decline in the market over the past few weeks, but it is still unknown if it will continue to climb or not. Yesterday, the market closed up across the board, with June HO up $0.0333 to $1.4754/gal, June RBOB up $0.0501 to $1.5396, and WTI Crude up $1.49 to $47.33/bbl.  The contracts have been teetering above the 13 day high, which will help determine where the market is headed.  If the market closes above the 13 day high, that will be a good indication that it should continue to strengthen.

It is still unknown what OPEC will decide to do as far as production cuts. Iraq and Algeria are now in favor of extending the current supply cuts for at least 6 more months.  Libyan output is at its highest level since October of 2014 and the United States is also increasing production.  Saudi Arabia is still going back and forth with production cuts.  The U.S. and the rest of the world will continue to increase production, which will put continued pressure on prices.  The continued pushing and pulling may have an impact on Saudi Arabia’s decision about the cuts.  Non-OPEC supply growth forecast is now at 950,000 bpd, almost a 400,000 bpd increase and up 64% since the last report in April.  Currently as of 11:25 a.m. ET the marketing is continuing to strengthen, June HO up $0.0158 to $1.4912 and June RBOB up $0.0244 to $1.5640. 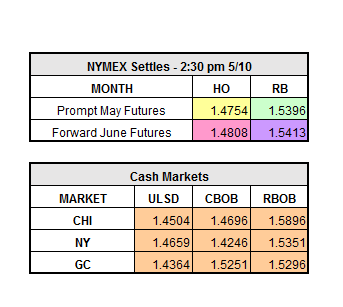