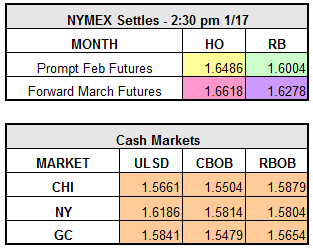 The market is continuing with downward pressure this morning, picking up where it left off after yesterday’s lower settle for refined products.  While crude finished the session slightly higher, diesel and gas were off by $0.0028 and $.0113, respectively.

The downward pressure of the last session and this morning is being driven by a few main factors.  Investors and analysts are still trying to digest President-Elect Donald Trump’s rhetoric regarding the dollar and how his incoming administration will impact global markets and the global economy.  With the dollar up slightly this morning, commodities are reacting in their normal fashion as crude, HO and RBOB are all solidly in “the red.”  Of course, another major factor and variable is the increase in U.S. shale production as crude prices go higher.  With crude currently near 18 month highs, U.S. shale production is on track to end a three month decline, according to the U.S. Energy Information Administration.  Data shows that February production will top 40,000 bpd.  As one oil strategist stated, “It’s the eternal question about the current flat price and what it does to U.S. crude oil production.”  Finally, stats from the OPEC/non-OPEC production cut agreement reached in November will be coming soon and will reveal whether participating nations are adhering to the cuts.  Under the agreement, both OPEC and non-OPEC producers promised to cut output by 1.8 million bpd through June 2017.  Initial results and more objective analysis will be coming in the next few days as a committee monitoring the OPEC/non-OPEC agreement will be meeting in Vienna on January 21-22.  One additional data point to monitor will be export volumes of the producers and their impact as well.  As BMI Research stated, “Sticking to output targets is important but export volumes from the participating countries are a much better indicator of how the cuts will affect the market.”

Due to the MLK federal holiday on Monday, the weekly stats will be delayed by one day.  Later this afternoon the American Petroleum Institute will publish its weekly data with the Energy Information Administration data following tomorrow morning.  An early preliminary poll by Reuters is projecting U.S. crude stocks falling by ~ 1 million barrels, gas inventories rising by ~ 2.3 million barrels and distillates dropping ~ 860,000 barrels.