On November 15th, President Biden signed his $1 trillion infrastructure plan into law. The funding will span over a five-year period with more than half ($550 billion) being allocated to transportation, broadband and utility projects. The infrastructure legislation will also put $110 billion into improving roads and bridges, $66 billion in freight and passenger rail and $39 billion into public transit systems. Pundits have advocated that this will help boost the economy and create new jobs. 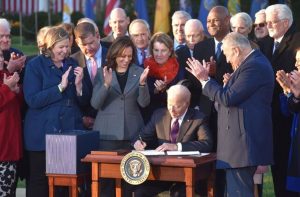 Over 800 people attended the bill signing with members from both political parties from Congress as well as mayors, governors and union officials for this historic event. For years, infrastructure has been frequently discussed in Washington, without much action taking place. That changed last week. President Biden stated, “We’re finally getting this done.”  He went on to say,” So my message to the American people is this: America is moving again, and your life is going to change for the better.”

Last August the Biden Administration released fact sheets detailing how funds will be dispersed among states and territories.  States could receive anywhere from $2 billion to $45 billion in non-grant funding for projects outlined in the newly signed law.  The federal money will be earmarked through a variety of programs that are run by the United States Department of Transportation.