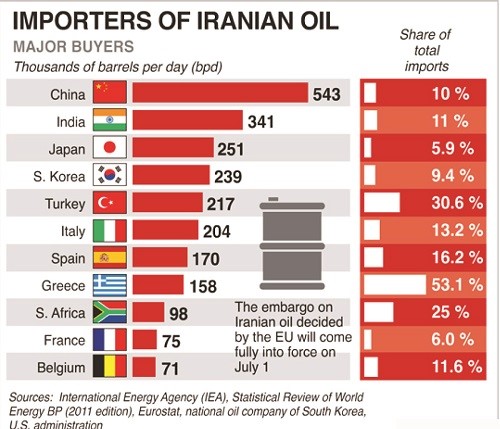 The second round sanctions by the U.S. on Iran will take effect in November. These sanctions will focus on Iran’s energy sector.  The Trump administration forecasts that it will persuade the countries that import Iranian oil to cut as much as 1 million barrels a day when the sanctions begin in early November.  The major importers of Iranian oil (China, India, South Korea and Japan) are all situated in Southeast Asia and are allies with the United States.

While the United States has been able to sway Japan and South Korea to cut back on Iranian imports, they have had some trouble influencing China and India. These two countries account for more than sixty percent of Iran’s total petroleum exports. China has stated that it will not comply with the Iranian sanctions and has the global clout to defy the United States. However, India is in a weaker position and the foreign policy of the nation will be tested if they choose the defiance route.

Politically and geographically speaking, India is in a tough spot.  India and Iran have a long history of trade relations that has grown stronger since 2016 right after the withdrawal of Iranian sanctions by the Obama administration.  Iran also offers trade incentives to India including free shipping, insurance and an extended credit period. Iran is also an important trade partner to India, importing $500 million in goods annually.  Lastly, India is heavily invested in the Chabahar port in south-east Iran, which is a strategic transit route between India, Iran and Afghanistan that cuts transport cost and time for Indian goods by a third of the price.

There are many things to keep an eye on in the coming months.  How high will oil prices rise when Iranian crude is off the market? Would higher oil prices in India deter Prime Minister Narendra Modi’s re-election in 2019?  Would Iran offer the Chabahar port to China if India complies with U.S. sanctions? All these questions and more will be answered as time moves forward.