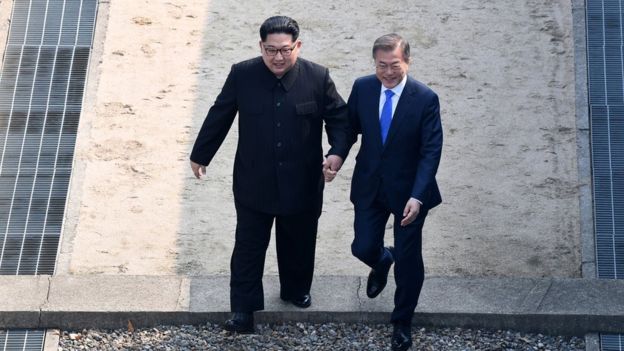 “If the best minds in the world had set out to find us the worst possible location in the world to fight this damnable war, the unanimous choice would have been Korea.”

June 25th, 1950 marked the beginning of the Korean War when North and South Korea began their decade’s long divide.  Within the Korean War, in just three years, there was a loss of nearly 5 million lives and a long lasting rift between the two countries was never repaired.  There have been hundreds of meetings between the North and South Korean leaders since but never has there been a mending of the fence or true talks of sustainable peace between the two countries…..until now.

The leader of North Korea, Kim Jong Un, made an impromptu move at today’s North and South Korean Summit where he took the hand of South Korean leader, Moon Jae-in, and both crossed the Korean military demarcation line together.  This marks the first time a North Korean leader has done this since the start of the Korean War in the 1950’s.  Both leaders come together at this historic summit and signed the “Panmunjom Declaration for Peace, Prosperity and Unification on the Korean Peninsula”.  Within the declaration Reuters reports that it includes “promises to pursue phased arms reduction, cease hostile acts, transform their fortified border into a peace zone and seek multilateral talks with other countries including the United States.”

It does not seem like long ago the world was watching in anxiousness as North Korea repeatedly conducted ballistic missile tests and vowed to develop and use its weapons in due time.  These talks and actions from the North Korean regime sparked a series of incredibly strong sanctions from the US, and our allies, to apply maximum pressure and stifle any financial or resource aid to the region.  What was the result of all of this?  Two neighboring countries in conflict the past 65 years have embraced one another today with their 80 million citizens watching.  CNN has wrote that “Kim and Moon leave behind a feeling of promise and positivity that hasn’t been felt on the Korean Peninsula for years.”

After this summit though it is safe to say that altogether there is an elevated level of optimism as the global markets have seen an increase as well as Reuters reporting that “Shares in Seoul briefly rose more than 1 percent to a one-month high and Japan’s Nikkei share average also gained.”  Over the past year a geopolitical tension like this has really put pressure on the markets every time any new, and negative, information came through from the Korean region.  The Business Insider has explained in September of 2017 that the main reason for oil market moves, in regards to this Korean peninsula conflict, is about refining capacity in Asia.  If you begin to look at how damaging an open conflict within Asia would be, more specifically China, South Korea and Japan, you then have to realize that those countries account for 65% of the oil refining of the region.  That a big chunk of Asia’s oil market in jeopardy and that would affect oil pricing across the globe.

So where does this leave us?  Does this seem too good to be true?  At this point the next pivotal step to this process will be whenever President Trump and Kim Jong Un finally meet face to face.  Trump has tweeted “After a furious year of missile launches and Nuclear testing, a historic meeting between North and South Korea is now taking place. Good things are happening, but only time will tell!”

This may be only the first step towards a stable and united Korean peninsula, but any step forward is a step in the right direction.