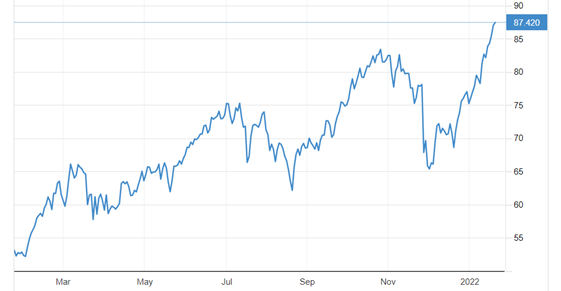 With growing oil demand still outweighing supply, the price of crude has officially reached eight-year highs. Last week, WTI broke the $85/barrel threshold, while Brent traded at $87/barrel. As major investment banks warn that crude may climb to $100/barrel, questions have been raised about how U.S. oil producers might be hedging the forward curve and increasing production for 2022.

Just over two years ago, crude oil traded right around $63/barrel. By April of 2020, demand plummeted, and crude dropped to $11/barrel while production in the U.S. alone decreased by 3 million barrels per day, down from 12.9 million barrels per day. During this time, investors and shareholders urged oil companies to cut spending and curtail investment in new drilling. [1] Investments have yet to rebound, but profitability was high for U.S. oil last year–especially for companies like Chevron and Exxon who were able to pay down debt and return cash to shareholders.

So why does the price of crude seem to be soaring? The short answer is that supply still isn’t meeting demand. As fear of the Omicron variant subsides, demand appears to be reaching pre-pandemic levels and beyond; however, domestic production has only increased to about 11.7 million barrels per day. Meanwhile, members of OPEC+ are failing to meet intended targets. In November, OPEC pumped 27.8 million barrels per day, but that was still 254,000 shy of its 400,000 barrel per day target, which could be due to outages in Lybia and political challenges in Nigeria. [2] Geopolitical conflicts and fears of supply disruption surrounding Russian incursion are also influencing price.

Given these factors, banks have a lot to say about where oil prices might be headed in 2022. JP Morgan analysts predict a jump to $125/barrel in 2022 and possibly even $150/barrel crude in 2023 due to OPEC’s capacity to produce. [3] Goldman Sachs estimates a jump from $90/barrel in Q1 to $95/barrel in Q2, and $100/barrel in Q3/Q4 [4]. Morgan Stanley also predicted in December that oil could hit $90/barrel as growing demand meets supply tightness.

How will U.S. shale producers respond to this from a hedging perspective? After Pioneer Natural Resources, the biggest oil producer in the Permian Basin, lost nearly $2 billion in profits in 2021 by selling production below rising market prices, it made the decision to reduce hedging for 2022. Likewise, Occidental Petroleum Corp. made the decision in November not to hedge for future periods after oil prices began to surge and banks began making predictions. [5] Since prices may hit–and may potentially surpass–$100/barrel crude, other oil-producing companies may choose to follow suit and reduce hedging. With that being said, the current 12-month crude oil curve sits at an average of $80/barrel. Permian oil is currently the cheapest oil to produce in the U.S. and average production costs are at $46/barrel as of January 20th. [6] Could this be the right time for oil companies to lock in a portion of their profits?

From a supply perspective, strategists and the Energy Information Agency estimate that rising crude prices will support the increased production of oil in 2022. By 2023, the U.S. could be producing up to 12.4 million barrels per day, but many shale producers are still facing constraints. [7] On Wednesday, President Biden announced that his administration will work with oil producing countries to make sure that supply meets demand. But will it be enough to sustain an estimated 3.5 million barrel per day increase in demand? These are the questions that will hopefully be answered in the coming weeks ahead.