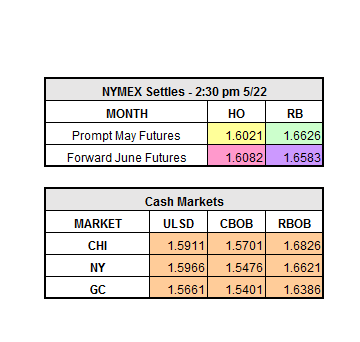 Important news to note is U.S. President Donald Trump’s new budget proposal, which would entail selling off half of the United States Strategic Petroleum Reserve (SPR). Selling these reserves would take place over the next decade and would begin in October of 2018.  The market reacted to the idea of this earlier this morning but has gained back the losses and then some.

OPEC’s cuts are becoming more of a sure thing as we approach this Thursday’s meeting, now the questions have become how much will the cuts be and for how long will they be in effect. The rebalancing of supply and demand could take as long as a year and a half to finally occur. As of yesterday, Saudi Arabia and Iraq are in support of a nine month extension rather than a six month extension of the production cuts.  90% of OPEC members are in line with the cuts so far which will take effect on January 1st of 2018.

Memorial Day weekend is quickly approaching and gasoline demand is expected to be high. The national average is up 2.5 cents from last week at $2.36/gal.  It will be interesting to see if prices will continue to rise with the upcoming holiday weekend, which is considered to be the beginning of peak driving season.  Currently, as of 11:42 a.m. ET the market is hovering just around flat, front month HO is up 10 points and front month RBOB is up 9 points.