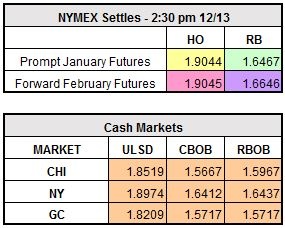 The market is trying to find direction today after yesterday’s steep sell off in refined products caused by the DOE inventory and IEA reports; however the Forties pipeline force majeure leaves short-term price direction unclear for WTI.

Yesterday the Department of Energy (DOE) reported a huge gasoline build of 5.7 million barrels last week which dropped the February crack spread to $13.32/barrel, after hitting a high of around $18/barrel just one month ago. This is starting to suppress the price of gasoline relative to the price of crude because historically at this time of year we see builds of around 4.4 million barrels. The fact that refinery runs are at 93.4%, 2.9% higher than last year, indicates we will continue to churn out gasoline and put downward pressure on prices relative to the WTI price.

Distillate inventories drew 1.4 million barrels yesterday when we typically see builds of 3 million barrels, but traded lower with the complex yesterday. This is reflective of the tighter distillate inventory picture this year with inventories 18% lower than last year. If we continue to get bursts of colder than average weather in the northern half of the country this winter, it could eventually cause some serious tightness in diesel and heating oil at the local terminals that aren’t fed by multiple sources of supply.

The International Energy Agency (IEA) released a report yesterday which said the global oil market will show a surplus for the first half of 2018, but could revert to being under-supplied in the back half of the year. “In the first half the surplus could be 200,000 barrels per day (bpd) before reverting to a deficit of about 200,000 bpd in the second half.” The Agency expects production from outside of OPEC, with the U.S. being a large component, to have risen by 600,000 barrels per day this year, before increasing by 1.6 million barrels per day next year. This makes sense given the February Brent-WTI spread last trades at $6.07/barrel. U.S. production last week increased another 73,000 bpd to 9.78 mbpd; we should expect this trend to continue.

In summary, the bearish gasoline and IEA outlook are battling the tighter distillate picture and European Forties pipeline force Majeure declaration. We may not get a clear direction on market prices until after the New Year.