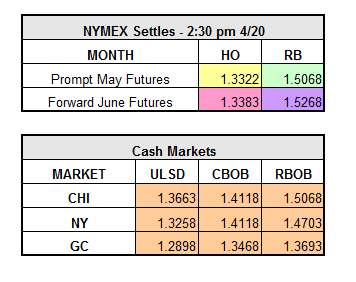 The sound of Mark Morrison’s “Return of the Mack” is filling the air this morning as OPEC’s secretary general said that OPEC and non-OPEC producers are looking to once again discuss a production freeze at OPEC’s June meeting. Return of the freeze? Most were on board with the market dropping back to values we saw in January and February, the strike in Kuwait occurred. The OPEC meeting being a non-event on Sunday started to drive the market down first thing Monday morning, but the strike leveraged that. Once the DOE statistics showed a build in crude but a draw in products and Cushing, the market took off and settled up $.0690 on diesel, $.0269 on gas, and $1.55 on crude.

With the DOE stats showing a crude build of 2 million barrels, you would think the market would have stayed around the level we were seeing yesterday morning, with diesel reaching a low of $1.2375. The draw of 3.6 million barrels on distillates came as a huge surprise because there was anticipation of a small build before the statistics were released. Cushing also had a draw of 250,000 barrels and total commercial stocks fell by 425,000 barrels. This was the first draw in six long weeks for the largest oil storage facility in the world.

The chief of the IEA has revealed that oil markets will rebalance by next year at the latest and is claiming that crude prices being around $45/bbl are still preventing the majority of U.S. shale producers from operating a profitable level. At what price will they be profitable?