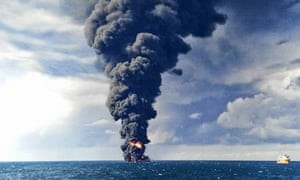 The United States sanctions against Iran’s oil exports entered into full force last week as the United States attempts to cripple Iran’s oil-dependent economy and suppress their nuclear desires.  Although Washington has vowed to halt all purchases of crude from Iran, it recently supplied eight countries with waivers to continue imports without penalty for the next 180 days.  While President Trump views this as a way to stabilize any fear of global price spikes, Iranian President Hassan Rouhani believes the United States had no choice but to grant the waivers and Iran has publicly stated they will continue to export as much oil as needed.  However, one thing to be cognizant of is, how will Iran ship their product?

On top of sanctions put forth on Iran’s oil exports, the United States also re-imposed sanctions on the shipping and insurance industries.  Iranian companies added to the sanction list include their national maritime carrier, the Islamic Republic of Iran Shipping Lanes and its transport company the National Iranian Tanker Company.  Special Representative for Iran, Brian Hook, cautions countries doing business with Iran comes with great risk, since they are in violation of maritime law by turning off their transponders.  At a recent press briefing, Hook stated, “From the Suez Canal to the Strait of Malacca and all choke-points in between, Iranian tankers are now a floating liability. Countries, ports, and canal operators, and private firms should know they will be likely responsible for the costs of an accident involving a self-insured Iranian tanker.”

Look no further than January of this year to understand the dangers and risks of transporting oil.  A tanker operated by the National Iranian Tanker Company collided with a ship off the coast of Shanghai spewing 1 million barrels of condensate oil in the East China coast.  The liability of this accident will be in the hundreds of millions of dollars and only a small portion will be covered by Iranian insurance companies.  The majority of the value is covered by international insurers.  With the re-imposition of the sanctions, the international insurers will no longer cover Iranian tankers.  “Self-insured Iranian tankers engaging in unsafe behavior with many tons of crude oil on-board is courting environmental and financial disaster. Our strong message to any entity considering doing business with these Iranian tankers is to rethink your decision. Protect your port, protect your business, and promote maritime safety,” Hook added.

Iran plans to file a complaint at the International Maritime Organization over the sanctions on maritime transportation, but it will be interesting to see how the waiver period unfolds over the next six months.